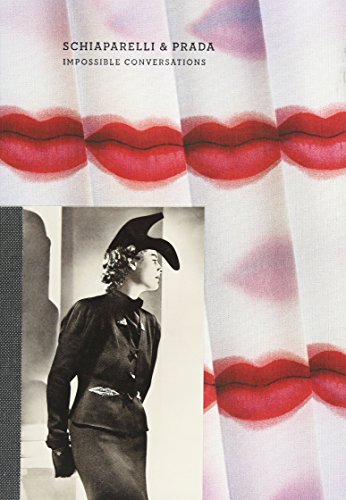 “. . . methinks Ms. Prada doth protesteth too much, for she does make pretty clothes and does use tactilely and visually pleasing shapes and fabrics like Ms. Schiaparelli did.”

The most difficult thing about reviewing Schiaparelli and Prada: Impossible Conversations is that one must keep in mind that this book is to serve as a catalog of sorts for the exhibition at The Metropolitan Museum of Art in New York City. As such, it is priceless as a keepsake focusing on two of the most iconic fashion designers of the 20th and 21st centuries.

The device used in the book to invoke this “conversation” between the two designers is wonderfully inventive and will no doubt be used again in future works with subjects involving the applied or visual arts to highlight the similarities and/or disparities in their respective work.

The subjects of Impossible Conversations are seemingly more comparable only if one considers some of the visuals and a some of the verbiage. Ms. Prada is far more cerebral than the late Ms. Schiaparelli who was, in my estimation, far more of a designer than the former.

Ms. Prada is a provocateur who applies her often outré philosophies to her designs, philosophies including “I have no interest in pretty dresses worn by pretty women” or her rallying cry of “making ugly chic.”

Conversely, Ms. Schiaparelli regarded fashion design as an art—the antithesis of what her counterpart aims to create—and she was indeed interested in making beautiful clothes.

What is most interesting about this presentation is that it will no doubt be compared to its counterpart of last year’s blockbuster Alexander McQueen: Savage Beauty. As for the text of this book, it is comprehensive enough to serve as a guide, catalog, or informational source for the exposition. But if you expect to be awed by its images—even the images in the show itself—you will be disappointed. The 2011 McQueen exhibit was far more spectacular.

Seasoned scholars or students of fashion might find the comparisons highlighted and fleshed out in Schiaparelli and Prada: Impossible Conversations a bit of a stretch, but there are certainly interesting parallels to be drawn between the two designers—even if Ms. Prada insists that she is the anti-fashion fashion designer. In fact, methinks Ms. Prada doth protesteth too much, for she does make pretty clothes and does use tactilely and visually pleasing shapes and fabrics like Ms. Schiaparelli did. And yet the finished products appear as polar opposites.

Make no mistake, The Metropolitan Museum’s exhibit and catalogue do succeed in reminding the world that Elsa Schiaparelli was a true fashion pioneer. And though her rhetoric might suggest otherwise, Miuccia Prada takes off where Schiaparelli left off, and will be anointed as a goddess of 21st century fashion.

Ironic, wouldn’t you say, that a designer who does not consider fashion an art form is being celebrated in such an extravagant manner at one of the greatest art museums in the world?