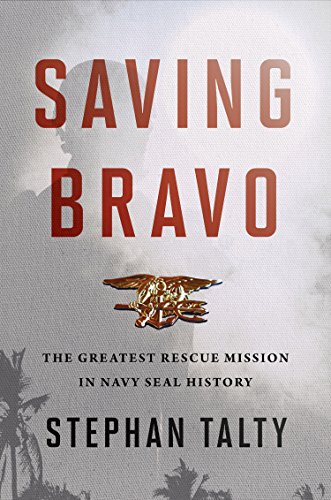 “Talty’s narrative is engrossing and well told. This is an inspiring work about courage in the face of unbelievable odds.”

Few nonfiction writers are as good as Stephan Talty, but in Saving Bravo, he is guilty of a minor hoodwinking of his audience. Yes, this action-packed history does involve a daring rescue operation conducted by a single US Navy SEAL, but the entire story is as much about the United States Air Force and a hardy South Vietnamese naval commando as it is about America’s most famous and elite fighting force.

By 1972, a growing majority of Americans were sick of the war in Southeast Asia. The intense ground fighting of 1965–1970 created a sense of hopelessness, with nightly newscasts reporting on such stark topics as heroin addicts in jungle green uniforms, instances of “fragging,” racial animosity between servicemen, and an enemy that showed no signs of weakening despite the technological superiority of America and her allies.

Thanks to President Nixon’s Vietnamization program, most US ground troops were out of South Vietnam by 1972. The only forces left were the flyboys of the USAF, and from their bases in Thailand and Saigon, Air Force pilots routinely carried out massive bombing missions in North Vietnam and provided much-needed fire support to the often under siege military of South Vietnam.

On April 2, 1972, a Douglas EB-66C, the steady workhorse of the USAF tasked with electronic warfare, was shot down over the DMZ. One man managed to survive the barrage of Soviet-made SAM rockets. That lone survivor was a 53-year-old navigator named Gene Hambleton. The son of Illinois soil, Hambleton had first joined the military back during World War II. Unfortunately for him, he did not graduate from US Army Air Corps training until 1945, and as such had to wait until the Korean War to finally see combat. For much of his life Hambleton felt in the shadow of his brother Gil, who had earned several medals flying over Nazi-occupied Europe. Now, Hambleton became the central figure in the largest rescue mission in US military history.

Talty’s excellent pen makes this story both high adventure and down-to-earth drama. Hambleton not only had the misfortune of being shot out of the sky, but the attack came in the midst of the NVA’s “red fiery summer” campaign, which the US termed the Easter Offensive.

This highly coordinated and fully mechanized assault saw thousands of NVA soldiers and Vietcong irregulars pour across the DMZ. This communist offensive also came with Soviet advisors and KGB agents, who hoped that a successful Easter Offensive would finally force America out of East Asia, thus strengthening the USSR’s hand in Vietnam in the face of increasing Chinese influence. Amazingly, when the rescue mission to save Hambleton began in earnest, none of the American pilots knew anything about the NVA offensive. They flew right into a massive trap.

Saving Bravo spends many captivating pages discussing the lives of the men involved in this herculean effort. Hambleton is described as a scrawny farm boy with two passions in life: golf and his wife Gwen.

The two other big players in this story are US Navy SEAL Lieutenant Tom Norris and Petty Officer Nguyen Van Kiet. Norris, a tough and stubborn kid from the Maryland suburbs, led a small band of South Vietnamese naval commandos and Rangers deep into NVA territory in order to rescue Hambleton and Mark Clark, another downed airman. After the Clark rescue proved a close call, all of the South Vietnamese troops backed out from going after Hambleton. All except for Kiet. He and Norris would eventually steal a fishing boat and managed to get a dehydrated and delirious Hambleton to safety despite traveling down a Mieu Giang river crawling with NVA troops. Norris would earn the Medal of Honor, while Kiet got the Navy Cross.

Talty also spends a lot of time on the men who died trying to rescue Hambleton. Jim Alley was a pacifist at heart who went to the DMZ armed only with a camera; Delaware Marine Captain Larry Potts threw away a nice, middle class life in order to serve his country; Bill Henderson and Jose Astorga were taken into captivity in North Vietnam and endured a year’s worth of torture; Anthony Giannangeli and Byron Kulland paid the ultimate price up in the sky, while Bruce Walker was killed in cold blood after his position was given away to the Vietcong by a female villager. Sixteen men in total died trying to save Hambleton.

Talty’s narrative is engrossing and well told. This is an inspiring work about courage in the face of unbelievable odds. Through it all, Talty reminds his potentially shocked readers that the men involved never contemplated the logic of risking so much to save one man. As Norris said to a reporter right after Hambelton’s rescue, “he would go back into the badlands that very night” if it meant rescuing more Americans held in captivity in North Vietnam.

Saving Bravo is can’t-put-down book that people should feel duty bound to read.