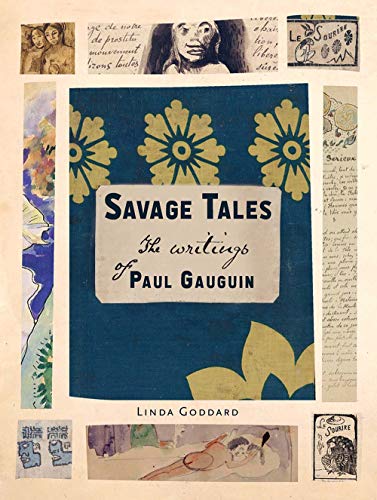 Paul Gauguin (1838–1903) is a compelling figure, both as an artist and man. Perhaps best known as a married stockbroker who fled constraint in Europe for the welcoming South Seas, he’s celebrated as a painter of naked Polynesian women surrounded by flowers and offering food. He’s the not-so-noble not-so-savage colonial figure immersed in the tropics and illuminating them on canvas.

Somerset Maugham’s The Moon and Sixpence (1919) reported on his wanderings; such films as the more recent French biopic Gauguin—Voyage de Tahiti (2017) do so as well. His complicated friendship with Vincent van Gogh, as well as Gauguin’s letters “home” have become the stuff of legend. As he wrote in 1897 to the artist Armand Seguin, “I have a fifteen-year-old who cooks my simple everyday fare and gets down on her back for me whenever I want, all for the modest reward of a frock.”

But there’s an ambitious art critic here also, a man who wrote, repeatedly, “This is not a book” while engaged in writing one and planning for publication. He hand-produced a magazine, Le Sourire—The Smile---with many editions and multiple proofs. He also worked in ceramic and wood and stone; his output was prodigious.

At auction today he fetches prices unimaginable during his lifetime; in the history of Post-Impressionism, he plays a central role. What’s less well known about Gauguin is how much time he spent with pen not brush or chisel in hand, and Savage Tales goes some distance to redressing that imbalance, stressing the painter’s prose. This volume (together with a companion text titled The Gauguin Atlas by Nienke Denekamp) makes the case for his expressiveness—though the language on offer is English and not the original French.

The Journals of Eugene Delacroix (much admired and often cited by Gauguin) are important documents, and the less celebrated Eugène Fromentin was also a traveler, painter, and writer. Gauguin’s intimate associate, Vincent Van Gogh, was much more literate than the widespread image of him as a rustic madman would have it; his Letters to Theo—a posthumously published collection of letters to his brother—are eloquent throughout. So it should come as small surprise that Gauguin was an accomplished writer, and Savage Tales is chock-a-block with phrases and perceptions that ring true.

Here are a few:

“The serious criticism of today, however full of good intentions and well informed, tends to impose on us a method of thinking and dreaming, and this threatens to become a new form of slavery. Preoccupied with its own concern, its special domain—literature—it risks losing sight of our concern, which is painting.”

“On the subject of civilised people, it had occurred to me to bring out the contrast between their character and ours, and I had thought it would be an original idea to write (me quite simply as a savage) next to the style of a civilized man . . .”

“Je marcherai à pieds joints sur les regles—I will trample with both feet on the rules.”

Goddard is well-versed in the literature on Gauguin and has herself contributed importantly to it. Her previous publications were focused on specific texts, only one of which, Noa Noa—his account of life in the tropics—has been widely read.

But Savage Tales covers more or less the full extent of the painter’s writings. The chapters deal, sequentially, with “The Artist as Anti-Critic,” “Noa Noa and the Artifice of Autobiography,” Scattered Notes,” “Gauguin’s Avatars,” and “Writing Primitivism.” In each she analyses the artistic and aesthetic strategies of the famous renegade, as well as his morality and politics. She cites sources for his quotations and attempts to take the measure of his originality, achievement, and ambition.

It is not easy to do so. At times the reader gets the sense that Gauguin’s talking to himself or reaching out to others half the globe away in a world where mail came slowly. As Godard puts it, “Gauguin used collaged images and text to construct a multifaceted, multimedia dramatization of his artistic identity. In one double-page spread, he penned an imaginary ‘letter to the editor’ at the bottom of the right-hand page, to which he affixed his signature. Here he pursued his attacks on art criticism, mocking critics who seek to categorise and label artistic styles and movements.”

Further, “Using a variety of media, authorial voices and literary registers—aphorism, criticism, poetry, polemic—Gauguin avoided the linear logic and labeling of the critical writing that he despised, in favour of the suggestive and synthetic approach that he associated with visual art.”

The book is lavishly illustrated, and the visual and verbal components complement each other—wholly appropriate, since the artist would “doodle” on almost every page of his prose. A self-portrait sits cater-corner to a transcribed poem by Verlaine, a letter to Mon cher Daniel displays at its bottom a series of nudes.

He pasted in photographs of natives and newspaper articles and Japanese prints; his sketches and sculpture and finished paintings are here reproduced. It all makes for a kind of sketchbook, self-reflexive as well as outward-facing, and should put to rest the notion of a man besotted by surroundings—so enthralled by naked women and multicolored flowers that he neglected his art.

Godard has done the reader a real service, making sense of the jumble of prose. At times her own writing can be jargon-filled, as in the jaw-cracking: “The perception of racial and sexual alterity, mixed with a desire to transcend it, which structured his primitivist outlook, is also pertinent to his sense of the opposing characteristics of visual and verbal expression.”

But by and large her analyses of what Gauguin was after, and why, provide an understanding of his “ways of seeing” (a phrase from the critic John Berger). And by the end of Savage Tales, with its elaborate system of notes and citations and extensive bibliography, she offers this final pronouncement: “In Gauguin’s ambivalent attitude to writing, both his strategies for identifying with the primitive, and the contradictions of this position, come to the fore.”