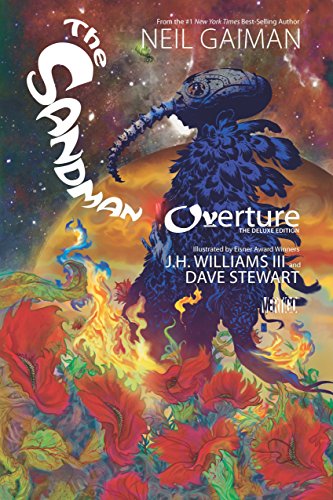 Sandman was always a wonderful mix of legend, literature, and out-there scifi, and Overture is no exception. In the foreword, an overture is described as a piece of music that introduces themes and tone for the piece, and it's a fitting name for this book. It's the last story in the Sandman series, and it tells the story before the first story. It's an end that is a beginning, neatly tying the series up into an endless circle. Appropriate for the story of Dream of the Endless.

In an alien world, one of the avatars of Dream is killed, which shouldn't be possible and yet happens. It draws all the versions of him from every culture all over the universe together to find out what happened, and leads to a galactic war caused by an insane star. And that, in turn, is caused by an old mistake that Dream now has to deal with.

Overture is a stunningly gorgeous work, full of beautiful art, wild inventiveness, and guest appearances by several of the beings we know from the series itself. It's a space opera and a very personal story told just a little out of sequence. It's a myth. It's a last hurrah for the series, and it's an explanation for why Dream of the Endless, a very powerful being almost as old as the universe, was able to be captured and held against his will at the very beginning of the first issue.

It has that same delicate and well-spoken touch that the main series is known for, and it manages to miss most of the nostalgia coming so long after the series ended could have brought with it. It's a return, but it's mostly just another story—albeit a large and intricate one.

The six issues collected here tell a long and sometimes branched and rambling story, but do it with a perfect economy of space; no page is wasted, every speech-bubble is necessary, and it functions both as the top of what comics can be and an art form that breaks out of the comics framework. It's exciting to read. It's engrossing.

The Deluxe Edition includes interviews, discussions about artistic choices, and ephemera like script notes and sketches that help round out the experience. And the book is gorgeous, from the cover to the nebula-printed pages that could have been left blank and weren't, to the art of the comic itself. It's more than worth having, and it's more than worth reading.