On the Same Page: A Novel 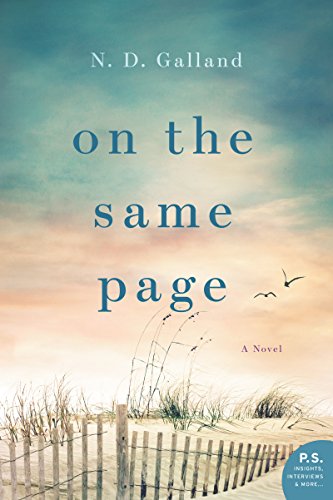 There's a saying, "You can never go home again." Is that true? Joanna Howes, raised by her relatives Jen and Hank after her biological parents proved unstable grew up on Martha's Vineyard among relatives, knowing almost all of the small populace of year-round residents, At age 18, she moved to New York desiring to become a writer.

Now years later, Joanna—known as Anna—is summoned home to care for the erasable Hank who broke his ankle. With Jen having passed years ago, Anna is the best choice to help Hank until he is back on his feet.

It seems strange to return to her roots, especially in the gloom and darkness of January, but Anna is happy to not be overrun by boorish tourists who try to claim ownership to the island. Now, Anna's main problem is financial. Though a freelancer, she still has to pay rent and utilities, so she accepts assignments from the Journal, "a scrappy everyman-style newspaper," and the one Hank likes.

This does not cover the high cost of her New York City bills, so she surreptitiously manages to collect jobs with the Newes, a competitor paper, "known to cater to genteel summer residents," and one Hank does not like. Isn't this a conflict of interest? Not when Anna needs the money.

Anna and Hank's banter portrays Hank as a cantankerous old man, yet his attitude could be from losing his independence or maybe he is just cranky. However, one can detect love between the lines:

"Hey, I saw some honey in the pantry. I'm going to open—"

"Don't open that!" he said vehemently, glancing back over his shoulder at her. "Don't touch it. That's a special gift. That's from Paul's first hive. It's local and unfiltered and very special. It has the honeycomb still in it." He returned his attention to the television.

"Are you saving it for a special occasion?" she asked. "The jar is so covered in dust, you can hardly see the contents."

"Honey doesn't spoil," he said, in a defensive tone, as if to the television.

"I know that, but it's not like it improves with age either," she said. "What are you saving it for?"

"Fine," she said. "Is there any other honey in the house?"

"Then why are you holding on to that honey?" she demanded, trying to tame down her exasperation.

"The bees aren't producing any honey this time of year," he said triumphantly.

"But honey doesn't spoil," she said, initiating his tone. "He can give me some from the same batch as the stuff that is gathering cobwebs in our pantry. Then you can have your honey and I can have my honey and we will label them and nobody touches each other's honey, and we'll all be happy, okay?" she said, more exasperated than she wanted to be. Senior citizen, she rebuked herself. Broken leg.

He laughed the Hank Laugh again. "All right," he said. "And since I don't eat honey, I'll have mine after you no longer have yours, so that makes me a winner."

Anna's days turn into weeks with her time is filled caring for Hank, his chickens and cats, completing household chores, and interviewing for both papers; neither is aware she is writing for the other. Her Journal byline is her name, though she uses a pseudonym for the Newes, realizing she is walking on slippery ground, but what can she do?

The description of this vacation paradise is revealed in a different light during the winter months; illustrated not as many would expect: “Depending upon the mood of the weather gods, the beach was either soft, smooth sand, or else tumbled with stones. The water and wind displaced tons of sand, and then deposited it all hither and yon with capriciousness, even seasoned beach walkers could never predict. The sand was finer here than on the long straight, stretch of the south shore, and the water marginally warmer since it was Vineyard Sound and not the Atlantic Ocean. Not that anyone went into the water this time of year.”

Things come to a head when a "wash-ashore" wealthy man named Orion Smith attends a Zoning Board Meeting Anna is covering. He is applying for an ordinance to have a helicopter landing pad on his property. Deemed rich, obnoxious, and not in tune with the natives, there is an uproar over his proposal, most loudly by Hank.

Anna meets Orion and their personalities click, sharing an undeniable attraction, but she does not realize he is the "enemy" until later. Though from completely different backgrounds, they begin clandestine, friends-only meetings at Orion's home so they won't be seen together.

Meanwhile, Hank's broken bones are not healing as expected, and Anna's stay lengthens along with her realized love for her homeland. If only she did not face her duplicitous situation with the newspapers and Orion. But dishonesty always seems to come back and bite one on the butt.

The freezing, gray, and neverending blustery winters on the Vineyard add appeal to this novel, for it is not usual to read about a locale usually depicted as warm, vibrant, and bustling. The flowery metaphorical prose portrays the hard-scrabble and frugal island inhabitants whose characters offer credence and panache, making the plot and storyline right on for an engaging tale.