The Saints of Swallow Hill 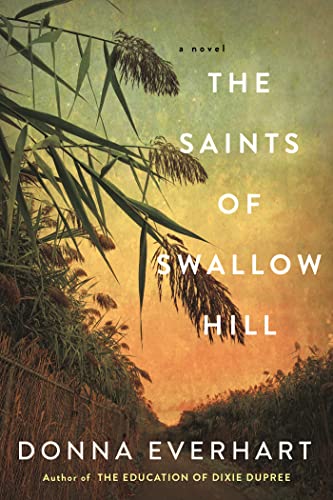 “A desperate, gritty story set against a backdrop of hard knocks and hard times, Donna Everhart’s historically researched The Saints of Swallow Hill is the triumphant story of unlikely bonds fatefully formed among the turpentine camps in the rural, Depression era South.”

The dedication page of Donna Everhart’s starkly realistic, rural Georgia set, The Saints of Swallow Hill reads, “This story is dedicated to all chippers, dippers, and tackers of tin.” Its opening line sets the mood of the stage: “He’d been working on Moe Suttons farm down in Clinch County, Georgia a few weeks when he and three others finished the day’s work and he’d let it slip that it was his birthday.” The story concerns the colliding fates of two down-on-their-luck characters, Rea Lynn Cobb, and Dell Reese, who meet in the ill-run, Georgia turpentine camp called Swallow Hill under false pretenses.

Twenty-eight-year-old Dell Reese is run out of Sutton’s farm after making the tactical error of pursuing Sutton’s wife, and leaves the way he comes in. “Dell had come to Sutton’s farm with two dollars, the clothes on his back, a couple cans of Vienna sausages, his rifle, and Melody, the harmonica that had been his grandaddy’s.”

Young widow Rae Lynn Cobb, raised in a North Carolina orphanage, flees her home in disguise under threat of blackmail. It is 1932, “Three years since the stock market crash, three years of nothing but bad news in the papers,” but Rae Lynn’s husband teaches her how to scratch out a living making pine gum at Cobb Turpentine Camp. Grateful to her elder husband for rescuing her from the orphanage and giving her the only home she’s ever known, after his terrible accident, Rae Lynn is found out by a neighbor when she grants her husband’s dying wish and mercifully finishes the job of his failed suicide.

In impressively researched detail, Everhart depicts the setting of Swallow Hill’s isolated Georgia turpentine camp. Dell Reese “smelled the camp before it came into view, the pungent odor of the turpentine still, the smoke of wood burning, and the scent of the pines,” where the old technique of chipping boxes to hold gum at the tree base is done by making chevron patterned signature cat faces on the trees with a special tool called a puller.

It is hard living in the ramshackle Swallow Hill camp. The camp commissary is prone to high pricing, so workers are given tokens, or “scripts,” instead of real money, which keep workers beholden to the camp’s owner, while living in dilapidated shack-like accommodations thought to be a step above Depression era shantytowns called Hoovervilles.

Scared, with a grieving heart and motivation to outrun her past, Rea Lynn applies for work at Swallow Hill’s turpentine camp disguised as a man named Ray Cobb and soon becomes targeted as an inept worker lagging behind the others. When the disguised Rae Lynn comes to the rescue of and befriends Cornelia, the abused wife of disgruntled camp commissary owner, Otis, a significant friendship begins that changes only slightly, when Ray Cobb is eventually found out to be the woman, Rae Lynn.

Fair minded Dell is intrigued by his co-worker. Thinking Ray Cobb is a wayward adolescent, Dell comes to the rescue when Ray is penalized by racist, evil foreman, Crow, who has a sadistic view of appropriate punishment for slackers and locks Ray Cobb for three sweltering days in a coffin size pine box. Once rescued by Dell, the truth of Ray Cobb’s identity is discovered, and Rae Lynn becomes domestically employed by Cornelia and Otis, in an arrangement short lived, when misunderstanding ensues and Ray Lynn and Cornelia flee Swallow Hill together.

On the run in Rae Lynn’s beater truck without a plan for the future, Ray Lynn and Cornelia spy Dell Reece with his rucksack, walking the road from Swallow Hill and give him a lift. Reluctantly accepting Dell’s offer for temporary housing at his family home in North Carolina, Rae Lynn and Cornelia ingratiate themselves into the rhythm of the household, and events are a series of stressful hits and misses, on the way to a satisfactory conclusion.

A desperate, gritty story set against a backdrop of hard knocks and hard times, Donna Everhart’s historically researched The Saints of Swallow Hill is the triumphant story of unlikely bonds fatefully formed among the turpentine camps in the rural, Depression era South.