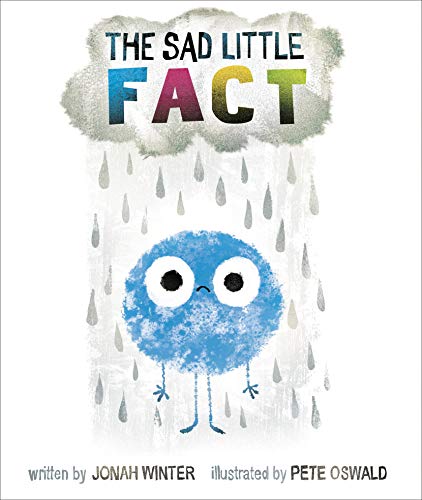 “Young readers will certainly need some adult guidance to grasp this important and timely message, and some adults might not feel comfortable with the book’s simplified delivery.”

Thus opens this well-meaning picture book, leaving us with the question: Why is the fact sad?

Well, because no one believes it, “They’d walk right past it or step over it without so much as a blink.”

In its underground prison the blue dot-fact meets other dot-facts, shown on a double spread each in a different color, declaring such well-known facts as “Human beings are members of the ape family” and “Two plus two equals four.” While the facts try to get out of their underground confinement, above ground, the authorities produce lies, label them “facts” and let them out into the upper world. But a “hardy band of fact finders” starts to search for the real facts and finally free them from their subterranean prison. Back in the light, “the facts were glorious in all their factual splendor.”

The book ends with a warning, that “some people chose to ignore facts, . . . But for those with minds to think and a need to know the truth, the facts could not be denied.”

Pete Oswald’s simple illustrations support the book’s message. The fact-dots are cute, the authorities look scary, and when the truth is buried it grows dark. But once the facts are back out in the sunlight, the false-facts are hauled away in a garbage truck.

The book’s intention is obvious and responds to the current onslaught of “fake news.” But the simple allegory leaves out important nuances and fails to explore crucial questions such as: How do we distinguish what is real from what is false? Why do some people ignore facts? And why is it so easy for authorities to create “false facts”? Young readers will certainly need some adult guidance to grasp this important and timely message, and some adults might not feel comfortable with the book’s simplified delivery.