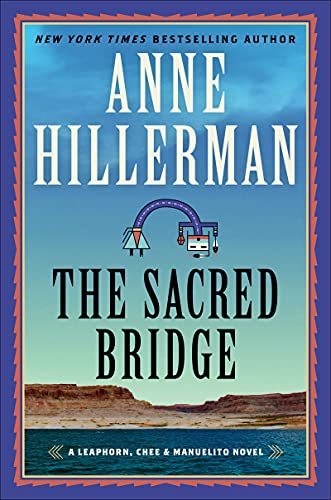 “The Sacred Bridge is further proof that Anne Hillerman continues to produce top-notch mysteries that entertain, amuse, and move us.”

Navajo Nation Police Sergeant Jim Chee is on vacation. In search of spiritual enlightenment, not to mention a little peace and quiet, he has traveled to Lake Powell to walk the trails, camp out on the land, and experience the sacred place known as the Rainbow Bridge. At the same time, he has agreed to search for a mysterious cave his former mentor, Lieutenant Joe Leaphorn, stumbled across years ago and has been unable to relocate since.

Unfortunately, Chee’s desire for rest and reflection is thwarted when he discovers a corpse floating in the water. “It seemed like a bad joke,” he told himself. “Overworked cop takes a few days off, goes to a lake, and finds a body.” And just like that, he’s caught up in another murder investigation.

Meanwhile, his beloved wife, Navajo police officer Bernadette Manuelito, witnesses a brutal hit-and-run murder and agrees to an undercover investigation inside a Navajo Nation cannabis farm to search for answers. Will her lack of experience in this type of operation put her life at risk?

The Sacred Bridge is the seventh installment in Anne Hillerman’s Leaphorn, Chee & Manuelito series, a continuation of the mystery series featuring the same characters written by her late father, Tony Hillerman.

Ms. Hillerman has long since proven herself to be a first-rate novelist apart from what her father accomplished, but the connection is worth mentioning here because she’s chosen to reach back into one of Tony’s early novels, Listening Woman (1978), for a story element that might have been forgotten by many Hillerman fans.

Chased by violent suspects through a series of caverns, Leaphorn encountered a cave filled with sacred sand paintings while surviving an attack by a large dog, an explosion that sealed the cave entrance, and other harrowing attempts on his life.

Years later, Leaphorn still remembers the paintings, which were left in the cave by the famous Navajo Standing Medicine, “for the People—the Way to start the world again.”

Afraid that the rising water levels of Lake Powell would have eradicated this priceless heritage since that day, Leaphorn asks Chee to take a look for the cave while he’s in the area. Chee, being Chee, agrees to devote time to the task.

While the cave and the paintings don’t play an important role in The Sacred Bridge, they nonetheless provide an interesting link back through the original story arc.

Continuity throughout the series is obviously of prime importance to Hillerman, and her consistent treatment of Jim Chee as a thoughtful, self-doubting, and very earnest man brings us back each time to see what progress, if any, he’s been able to make in his quest for inner peace.

As well, her decision early on in the series to move Bernadette Manuelito up to the foreground as a primary protagonist has also paid dividends. Is there a more endearing and likeable cop than Bernie, a well-meaning magnet for trouble if ever there was one?

The author reveals in her Acknowledgments that this novel was particularly difficult for her to write, not only because of the challenges imposed by the pandemic but also by the passing of her spouse, photographer Don Strel.

While readers would surely wish to express their condolences to Ms. Hillerman for her loss, it must be said that the depths of feeling experienced at times in this novel, especially between Chee and Bernie, likely flowed from the author’s personal emotions while writing the story.

The Sacred Bridge is further proof that Anne Hillerman continues to produce top-notch mysteries that entertain, amuse, and move us.