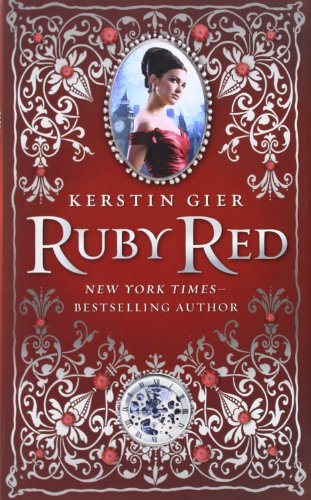 Ruby Red, initially published in Germany in 2009, has finally reached the U.S. shores where American teens have eagerly anticipated its arrival. It’s the first of the Ruby Red Trilogy, a YA series that has it all: romance, mystery, and time travel. Reading Ruby Red is like going on a road trip through time with a new friend.

Gwyneth Shepherd seems to have a fairly typical life in contemporary London. She goes to school, does her homework, and has a BFF named Lesley who is prone to Google pretty much everything. Sixteen-year-old Gwyn lives with her mom in a mansion filled with eccentric relatives. But things aren’t quite as normal as they appear. Gwyn talks to ghosts and gargoyles, while cousin Charlotte trains for time travel.

Some female members of Gwyn’s family carry a gene that allows them to travel back in time. It first looks as if the gene skipped Gwyn, showing up instead in Charlotte. Because unregulated time travel can be hazardous to the health, Charlotte’s entire life has been devoted to learning how to dress and act whether she lands in the 19th century or the 18th. In fact, a wardrobe mistress/hair designer at the mansion ensures Charlotte is properly prepared, dressed in perfect period clothing with just the right hairdo.

When Charlotte starts feeling dizzy, family members are certain she is about to make her first leap back in time. After all, she was the one who was born on the day that foretold the birth of the Ruby, the final link needed to close the secret circle of a mysterious society that transcends three centuries. But Gwyn’s mother lied about her birth date. Gwyn was born on the same day as Charlotte. It is Gwyn, not Charlotte, who is the time-traveling gene-carrier destined to be the Ruby.

When Gwyn sets off on an errand for Great Aunt Maddy one day, she suddenly finds herself cold and wet outside her house in a time obviously not her own. Vintage cars threaten to run her down. Shops have unfamiliar names. Strangers in old-fashioned clothes gape at her. Should she try to get back into her house? Gwyn’s ancestors have lived there for generations, but would her great grandparents know her if she hasn’t been born yet? Just as Gwyn prepares to ring the doorbell, she returns to the present.

Gwyn jumps back in time two more times over the next day before she tells her mother about her travels. Gwyn has not received the training she needs to time-travel safely. Her grandmother, Lady Arista Montrose brings in Gideon de Viliers, a handsome young man from a family where males carry the time-traveling gene to help prepare Gwyn in her new role. It’s a prickly relationship from the start. Gideon seems to be in love with Charlotte. Gwyn finds Gideon an arrogant snob, while he thinks she is childish and naïve. Their feelings change when Gwyn saves Gideon during a sword fight two hundred years ago.

This story has several unusual elements to it. The time-traveler’s blood is “read into” a chronograph, allowing the person to travel to a pre-selected time. The time-traveler is a bit similar to a werewolf that changes with a full moon. The person can be locked up just before the change to protect both the werewolf and society. Ruby Red’s time travelers are prone to travel uncontrollably at inopportune times. To prevent this, the chronograph can send them to “elapse” for three hours a day at a safe place in a safe year. This prevents jumping back in time haphazardly.

Mysteries abound. Did Gwyn really see herself kissing Gideon in the past? Why did Gwyn and Gideon’s ancestors Lucy and Paul steal the first chronograph and hide themselves somewhere in time? The Guardians are supposed to protect the time travelers. So why did Count Saint-Germain, founder of the Guardians, threaten Gwyn’s life? And what exactly is Gwyn’s role in closing the circle of the mysterious society?

It can be challenging for a writer to include background material in a way that doesn’t detract from present events. But Gwyn’s friend Lesley excels at research and her findings serve as an effective device to give readers important information about Gwyn’s ancestors without resorting to the dreaded info dump. At times, the narrative feels a trifle formal for today’s YA novel. Without reading the book in German, it’s difficult to know if that formality is in the original text or if it appears during translation.

At its heart, Ruby Red is the story of a girl on a quest. Gwyn must define herself as a young woman. She must discover the truth of her origin and learn the possibilities of her future. And while the overlapping mysteries are occasionally a bit tricky to follow, the forthcoming sequels, Sapphire Blue and Emerald Green, are certain to bring clarity to this complex and highly entertaining tale.