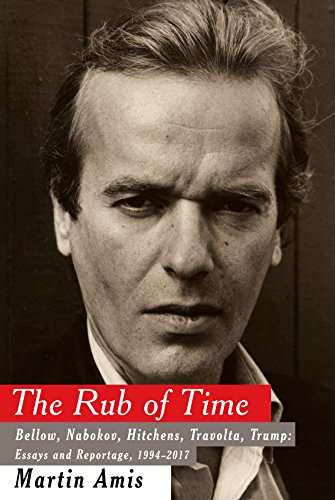 This collection of short pieces by the British writer Martin Amis takes you into a wide range of his nonfiction work. These pieces are drawn from a variety of newspapers and magazines, both British and American, for which Amis has written over the last 31 years. The subject matter includes the literary, political, and the personal.

If you have read Amis’ fiction, you will be delighted to find these gems. If you have not read Amis, these essays will provide you with an introduction to his brilliant use of language and his insight into many of the foibles of modern life. His critiques can be wilting, while his insights are often illuminating.

The beauty of this collection is expressed in Amis’ sharp wit. He is a master of the English language and a superb reader of the highs and lows of the human condition. His insights are at times breathtaking, and, at other times, simple statements of the self-evident as he hits you over the head with them.

It is not possible to comment on all the pieces in the collection, but several individual essays and groupings are notable. In some cases they reflect his fiction, while others are personal. The essays on his father, Kingsley Amis, are tributes to him as a writer and, at times, quite moving on a personal level.

In a similar vein, anyone who knows the work of Christopher Hitchens from television or print will appreciate Amis’ affectionate portrait of the man and the critical assessment of his work. Amis and Hitchens were lifelong friends although often in strong disagreement on politics and other matters.

From the world of serious literature, this collection has several entries in which Amis analyses and pays tribute to his favorite contemporary writers. At the top of his list is Saul Bellow, regarded by Amis as the very best of modern writers. Both the analysis and the praise are clear and convincing and may lead you to Bellow’s work.

A close second is Vladimir Nabokov who is treated in several of the essays. Amis’ comments on Lolita are particularly illuminating and well worth reading. Others admired by Amis and treated in these essays include Philip Larkin, Philip Roth, and Don DeLillo.

In a section on sport, Amis offers a self-examination of his obsession with tennis and his own court fantasies. The hackers of a certain age who read this will find much with which to self-identify. Included in this sport section is a scathing treatment of Diego Maradona, which will, no doubt, enrage the many fans of the Argentinian football legend.

Also on football, there is a report by Amis on his trip to the 1999 Champions League Final in Barcelona won by Manchester United over Bayern Munich 2-1. Amis puts his readers into the middle of the event capturing the atmosphere in the stands and in the city.

Two pieces on the British Royals are placed in tandem and both are moving and instructive, especially for those outside the British monarchial tradition. The royals are an obsession for many and in his essays on the death of Princess Diana and on the Queen’s reaction to it, Amis takes us beyond the events to exam the role of the monarchy, the person of the queen, and the complexities of the reaction to the death by the Queen and by the public. Both pieces offer moving passages and insight into the public relationship with the People’s Princess and Queen Elizabeth II.

Amis demonstrates his ability to skewer it all with the skill of a minimalist brain surgeon slicing to the core. In a few brutally colorful words and phrases, Amis leaves his victims on both sides of the Atlantic publicly stripped of all pretense.

This collection is a cornucopia of delights and irritants while simultaneously deeply satisfying and educational. What more could be asked for from Mr. Amis?