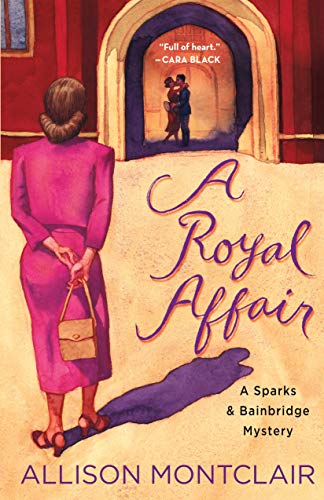 “Montclair does a good job of keeping the reader on his or her toes until the very end."

Gwendolyn Bainbridge and Iris Sparks are about as alike as night and day, but that’s what makes their business so successful. The Right Sort Marriage Bureau makes matches for women and men by sorting through possible matches and putting them together.

It’s a fledgling operation, but is enjoying some success when they are approached by Lady Patience Matheson, cousin to Gwen. Lady Matheson “works for the Queen in some capacity” and her visit to the Bureau is not an accident. But it requires the utmost in security and confidentiality.

World War II is in the recent past, and although scars still linger, England is moving forward toward a positive future. One of those steps is the status of Princess Elizabeth—the next person to step into the position as queen when her father passes. It is therefore of paramount importance that whomever she marries must be without question, appropriate for the role of King Consort.

The princess is in love with Price Philip of Greek royal blood, and there cannot be any scandal about his qualifications. And therein lies the rub. The princess has received blackmail letters insinuating that proof exists that Philip is not legally whom everyone believes him to be, and if that is true, he is not worthy to marry the princess.

Gwen and Iris take on the responsibility of tracking down the blackmailer, retrieving any incriminating evidence, and vetting the prince as suitable for marriage. And the game is afoot!

And thus, starts A Royal Affair, the second novel in A Sparks & Bainbridge Mystery by Allison Montclair.

Gwen is widowed, upper crust, with one child, and in-law issues regarding the child. Iris’s history is somewhat murky, as her war background is muddled with spy activities that she wants to put behind her. Both women have different connections, which will prove to be valuable in this particular assignment.

A series of characters emerge—both a help and a hindrance to our main characters, and yet they each bring their individual skills to the front as they search the few clues they have been given. Their primary role is to vet Prince Philip and ensure that he is a qualified candidate for the princess.

Sally, a friend of Iris’, a writer, and devoted to his friend will follow whatever path he must to aid her search. Archie Spelling is handsome, devoted to Iris, and a member of the underworld; his connections prove invaluable.

The mystery man, Talbot, is named in the blackmail letter as the man who retrieved information on Prince Philip that could prove harmful to the match, but who exactly is Talbot?

Mixed in with the storyline search for the blackmailer finds Gwen in a state of conflict with her in-laws who want to control her son’s future. A tug of war between the good of her son, and the good of the country makes for a difficult decision, indeed.

Uncovering Talbot’s identity proves to be easier than originally anticipated, and yet the man is dead, so who has the information alluded to? Iris pulls on her WWII connections to retrieve further clues, and Iris and Gwen are led down a path that leads to murder. Gwen and Iris barely escape the planned meeting without being caught, and they return to their office where they discover that they have been followed and a connection is established by the man who claims to have the information and will part with it for the £5000.00 they hold.

A scuffle ensues and Iris takes the man down; Archie drags him away to learn who hired him. Not with any success.

A series of red herrings and clues begin to clutter their pathway and yet, they prevail in their search, putting all the pieces of the puzzle together until they gather all of the characters at the place of the murder, and much like an Agatha Christie story, reveal the guilty party and tie up all the loose ends.

The story is a fun read, and Montclair does a good job of keeping the reader on his or her toes until the very end. It is a true mystery where the guilty party turns out to be someone least expected.

It will be hard to top this premise, should the series continue. One can only hope!