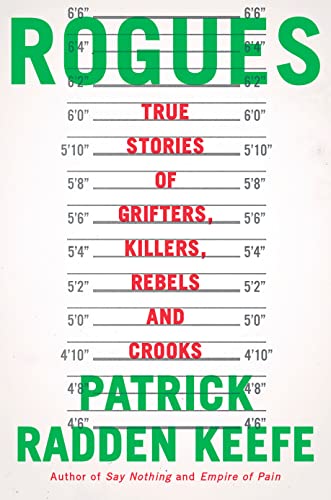 The subtitle of Patrick Radden Keefe’s new collection of 12 previously published nonfiction stories mentions grifters, killers, rebels, and crooks. And for the first 11 pieces in the volume those epithets hold absolutely true. The essays are all mesmerizing to one degree or another, but what many readers will find the most fascinating profile among the dozen is the last—it’s not about a grifter, crook, or killer—it’s about the globetrotting chef Anthony Bourdain.

Every aspect of the Bourdain story, written in 2017, is gripping and poignant, given that readers know they will come eventually to the final footnote: Anthony Bourdain took his own life on June 8, 2018. Radden Keefe gets to the essence of Bourdain’s charming, destructive, and feverish character. “Like a great white shark, Bourdain tends to be photographed with his jaws wide open, on the verge of sinking his teeth into some tremulous delicacy.” Radden Keefe’s portrait is sympathetic but not hagiography. He recounts Bourdain’s addiction to heroin and cocaine, an often-self-destructive dynamo. The narrative is elegiac but only by implication because of the context of what the reader already knows of the Bourdain tragedy.

Radden Keefe offers a memorable account of Bourdain’s meeting with then President Obama in Hanoi in narrow little restaurant specializing in noodles, smoky sausage, and charred pork belly on a busy street across from a karaoke club. The day after the meal, Bourdain tweeted a photograph of their meeting online and said: “Total cost of Bun cha dinner with the President: $6.00 . . . I picked up the check.” Describing Bourdain as “Apollo in drag as Dionysius,” Radden Keefe leaves the reader with the impression of a man who is manic but deep-hearted and lovable, a smart guy who was down-to-earth, the kind of man who found writing a “less grueling art than cooking” and body-pounding bouts of jujitsu fun.

Radden Keefe is known as a staff writer for The New Yorker and the author of four previous books, most notably the National Book Award winning Say Nothing: A True Story of Murder and Memory in Northern Ireland, the chronicle of Jean McConville, the 38-year-old mother of ten who was abducted from her Belfast home by masked IRA thugs. Her bones were discovered three decades later. In Say Nothing, Radden Keefe tells the story of McConville’s fate and the tragic consequences for her children. Her story and theirs become microcosms of the larger story of the Troubles that raged in Ireland until the brink of the 21st century.

Patrick Radden Keefe is the heir to John McPhee, Gay Talese, and Joan Didion. He’s a reporter of the first order, and one who knows how to make facts come to life. Even in his preface— usually the landscape of dry, informative accounts of what is to come—Radden Keefe offers a compelling anecdote about a call he received from one of El Chapo’s lawyers.

The tales that follow the preface in Rogues fulfill the promise of that introduction and the suggestion of the subtitle. Radden Keefe tracks fine wine forgers; a Dutch crime family that seems straight out of a Greek tragedy; a man obsessed with solving the mystery of his brother’s death in the 1988 Pan Am Lockerbie bombing; a failed professor turned mass murderer in Huntsville, Alabama; and the strange connection between the Hollywood producer Mark Burnett and his most famous protégé, Donald Trump, on The Apprentice. Occasionally, Radden Keefe drops the cloak of objective reporting and allows a lively opinion to squeeze happily between the facts: “His [Burnett’s] chief legacy is to have cast a sexually bankrupt carnival barker in the role of a man who [would] become the leader of the free world.”

Of course, there’s a story about El Chapo, as well as tales of Swiss bank corruption, a Syrian arms merchant, and rapacity in the African country of Guinea. Each tale proffers a moral dilemma, plots and characterizations tending toward gray rather than black and white, leaving the reader to ponder the mysteries of even a heroic character like defense attorney Judy Clarke whose “specialty is what the Supreme Court has called ‘the worst of the worst’: child rapists, torturers, terrorists, mass murderers, and others who have committed crimes so appalling that even death-penalty opponents might be tempted to make an exception.”