Rogue Heroes: The History of the SAS, Britain's Secret Special Forces Unit That Sabotaged the Nazis and Changed the Nature of War 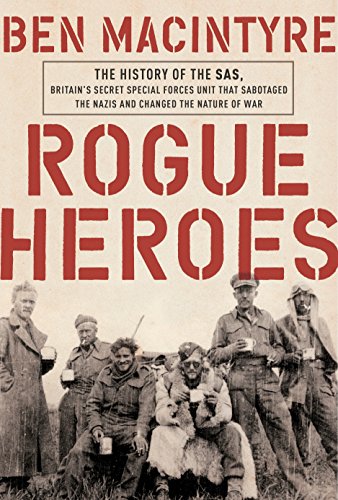 “No book on the colorful SAS could be as much fun to read.”

Some very strange characters were in North Africa in 1941–1943, the special kind of eccentric legendary to the British army. A couple of maverick lieutenants used parachutes that arrived in Egypt by mistake to make a phony commando unit real for purposes of stopping German Commander Erwin Rommel's invasion of Egypt and the Middle East.

So began L Detachment of the Special Air Service. It was originally an outfit invented by the legendary Dudley Wrangel Clarke to make the Italian army defend against an airborne unit that did not exist except in his invented and deliberately leaked paperwork.

The real unit that emerged would fight commando raids in Egypt, Italy, and northern France that became legend. It still is fighting for Queen and Country today, the inspiration for many modern commando units.

One officer described the SAS as made up of “the sweepings of the public schools and prisons.” The volunteers assembled by the sometimes inept and often unlucky “devil may care” David Sterling were adventurers. Author Ben MacIntyre describes them as “American, Canadian, Irish, Jewish (from Palestine), French, Belgian, Danish, and Greek,” with British and even German members.

Members of the SAS would almost have benefitted the regular army if they had not returned. They included psychopathic street thugs to members of the noble class and even a Member of Parliament. Randolph Churchill, son of the prime minister, accompanied them on one of their boldest raids.

The unit was under resourced and over extended for their missions. What they needed they stole from their neighbors or often manufactured. All that they were ever given in sufficient amounts was independence—they were relatively free from the crushing politics, paperwork, pettiness, and spit and polish of the regular British army.

The unit began airborne but inadequate parachute training and military reality made that dangerously impractical, as were boats. Trucks proved the right transportation and an effective commando weapon used for unplanned attacks on parked vehicles while driving down highways behind enemy lines.

The SAS did enormous damage to the Axis in wrecked aircraft, at relatively little cost to the British army. Many of the SAS operations failed, some disastrously, or had to be called off but commando raids are called suicide missions for a reason.

To say this book is readable would be an understatement. Its chapters would make great movies although sometimes akin to Monty Python or Black Adder. The author allows no qualifications or restraint to take anything from the color of his characters or the high adventure in his storytelling.

It is, as the author says, “an authorized history, not an official one.” He freely admits that his book is a psychological tale about the spirit of a band of brave men, not a complete and thorough scholarly history.

The book has some distracting redundancy. Some of the wording of the narrative could have left the reader in more suspense. These minor faults will likely go unnoticed, however, in such a sparse but entertaining narrative of an adventure story.

The research for this book is extensive and includes in-depth interviews with survivors. It is, however, “not a specialist military history but a book for the general reader.” Many other books are available on the SAS.

A comprehensive history, MacIntyre explains, "if such a thing were possible, it would be incomprehensible." He did extensively use the SAS War Diary and archives.

No book on the colorful SAS could be as much fun to read. It is also a tribute to the gallant and a must for the reader who loves great World War II history.