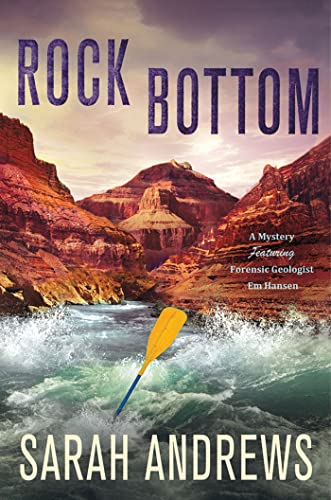 One of the joys of genre mystery fiction is that despicable people usually get their comeuppance. And one of the happy developments in publishing is the number of authors who draw from their original professions to write interesting, informative series.

Put these together and you get geologist Sarah Andrews’ novels featuring forensic geologist Em Hansen, now up to volume eleven in the series. Rock Bottom differs from its predecessors in that it doesn’t center on Em’s work; rather, she’s on vacation—a late honeymoon—having acquired both a husband and a stepson since her last adventure.

In that previous book she found her husband, Fritz, a man of magnificent abilities, including flying fighter jets. They are now six months wed and launching down the Colorado River through the Grand Canyon on a rafting trip arranged  as a wedding gift by Fritz’s best friend. At the last minute the friend is knocked out of commission by an accident, leaving Fritz in charge of 15 people aboard four rafts and three kayaks.

Although he’s up to the task, Em isn’t; she has a phobia about moving water owing to a tragedy in her past. But she gamely goes along and finds her pleasure in the geologic marvels of the Canyon and the relaxing stimulation of living it rough in the wilderness for three weeks.

Those pleasures are marred by one of their trip mates, the repellent “Wink” Oberley. An ersatz geologist and experienced river guide who’s worked his way through every outfitter serving the Canyon (none of whom will hire him again), he is the bad apple of the bunch, making the trip memorable in all the wrong ways.

Wink also fraternizes mysteriously with another group running the Canyon, meanwhile worrying Em with his threatening behavior toward her stepson, 13-year-old Brendan.

The new responsibilities of motherhood challenge Em as much as the Canyon’s hellacious rapids and Wink’s troublesome antics. As a scientist, she doesn’t know how to relate to a kid who was raised by a fundamentalist birthmother who taught him to believe in creationism.

Lucky for Em, Brendan’s school project—assigned to compensate for classroom absence because of the trip—is to write a report about the Grand Canyon. On this subject Em is confident, and her lessons to Brendan about the science behind this natural wonder forms the geologic interest in the book.

The plot, however, is a murder mystery, so it comes as no surprise when Wink turns up dead. The case forms an outdoor version of the locked-room puzzle: Nobody could get to Wink—or the geologist’s rock hammer that killed him—except Em’s husband, Fritz.

Although Fritz has means, motive, and opportunity, it’s obvious to the reader that he’s not guilty. Not so obvious to the National Park rangers, who put together a strong case against him from circumstantial evidence.

Rock Bottom is structured around their investigation, alternating between their communications about their discoveries, Em’s narrative of the trip (and her private investigations), and diary excerpts from a secondary character in the other river party. Everyone comes together at the takeout, at which point Fritz is promptly arrested.

Here the novel starts to go off key. Em’s history of involvement in murder cases gains her credence among the rangers in a manner that seems to come too easily. So does help in her unofficial investigation: Friends contribute—and appear—at the drop of a hat, performing just-in-time feats that nudge uncomfortably close to deus ex machina. This includes the miraculously convenient arrival of a pregnancy test kit.

Technically, regardless of how conveniently, all the pieces fit together, bringing the story to a tidy close. Ms. Andrews leaves the reader with a surprise promising to be continued in the next volume. Where we end up is a startling departure from where Em started in the series, so readers attracted to the focus on geology may worry it’s fading into the background. The next volume, assuming the series continues, ought to clarify whether that is the case moving forward.