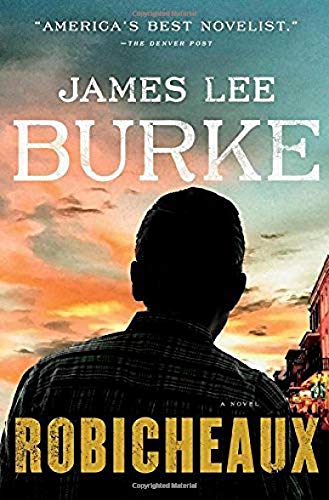 “plenty of dogged Robicheaux detecting, a high body count, and welcome exchanges of dialogue with an authentic Louisiana sound.”

Dave Robicheaux has bad days and he has worse ones. There seem to be nothing in between. Most of the bad ones center around memories of his wife, Molly, killed in an auto accident officially deemed her fault. They become worse when flashbacks of Vietnam intrude and Dave falls back on drinking to ease the pain and momentarily wash his brain clean of misery.

Dave also has moments when he can see the spirits of dead Confederates slogging through the swamps or gathering in the town square but he’s doesn’t broadcast that. Mainly, he feels an affinity with those long-dead Southerners. “Mortality is not kind, and don’t let anyone tell you it is.”

When Fat Tony Nemo asked him to return Robert Broussard’s Civil War sword to his descendant, it opens a can of worms that will end in many deaths and Dave himself being accused of murder.

The descendant is author Levon Broussard, Bayou Teche’s minor celebrity and local recluse. Fat Tony wants to produce a movie of one of Levon’s novels, but Levon is as determined it isn’t going to happen.

“Everyone knows Levon hates Hollywood. On CNN he said Hollywood is a potential gold mine for anthropologists because it’s the only culture in the world where educated people have the mind-set and manners of white trash.”

It’s only when Dave’s adopted daughter Alafair, a writer herself, pays a visit home and announces she’s writing a script based on the novel that Levon accepts Fat Tony’s offer. Backed by Jimmy Nightingale, local boy turned politician, the movie goes into production.

Then everything calls apart. Levon accuses Jimmy Nightingale of assaulting his wife. TJ Dartez, the man involved in the accident in which Molly died is killed, and Clete Purcell makes himself unofficial guardian of Homer, a child being neglected by his father. Somehow, it may all be connected to the eight young women found in a bayou with their throats cut. Spade Labiche, a bully of a fellow police officer who goes out of his way to needle Dave, is one of those investigating.

“Spade came from a family that made a living out of law enforcement and jails. Without criminals, they would not have had a livelihood.”

In the following days, Dave will have both a police investigation and an unofficial one to determine if he did kill Dartez during an alcoholic blackout, or if he was a witness to the murder, and also of the real facts in the Nightingale-Broussard case. With Jimmy’s political aspirations on the line, he’s treading a thin path between being fair and looking the other way, and none of it will turn out as anyone expects.

If the reader has read other Dave Robicheaux novels, this one may be disappointing. It’s overlong, filled with so much material as to be extraneous—descriptions of ghosts interspersed with minor diatribes on man’s inhumanity to man, flashbacks of Vietnam, moody reminiscences, and alcoholic dazes.

In between, however, it’s redeemed by plenty of dogged Robicheaux detecting, a high body count, and welcome exchanges of dialogue with an authentic Louisiana sound.