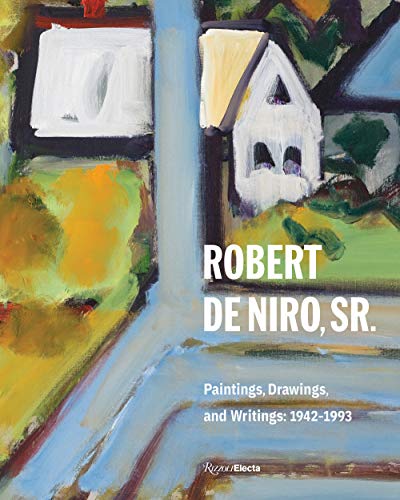 “there was courage and conviction in his decision to eschew the title of abstraction that so many of his peers pursued in favor of a lifelong commitment to the tradition of representational painting and drawing that he was passionate about until his last day.”

Robert De Niro Sr. was a figurative painter who began his career in the late 1930s and soon met with much success. He studied with legends Hans Hoffman and Josef Albers, and at the early age of 24 was given his first solo show by none other than Peggy Guggenheim, to great critical acclaim. His penchant for bold color and strong, broad strokes made many compare him to Matisse, and he did favor subject matter that was similar to what was coming from the School of Paris, and was much in vogue at the time: portraits, still lifes, female nudes, and interiors.

But even then there was something unique about his work, a sort of sensuous abandon, his deft use of the heavily paint-loaded brush, both of which rendered work that seemed to make static subjects come vividly alive on the canvas and gave his paintings a fluidity, a movement, and a presence all their own.

Then came Pop, Abstract Expressionism—De Niro is sometimes identified as an abstract expressionist, which he did not believe he was—Minimalism, and as they became the rage, De Niro’s work fell out of fashion. Still, he persisted, making painting after painting in the style he championed: color smorgasbords of life rendered bold, vibrant, and, mostly, happy. In fact, the older he became and the more forgotten his work, the brighter, bolder, and happier his renderings, fame or no fame.

Indeed, In the essay that opens this book, “Late Laurels for a Painter’s Painter,” Robert Storr reflects on the artist’s lifelong commitment to his own vision of his work, to his refusal to go after fame if that meant being someone else as a painter, and identifies this focus as one of the important things that set Robert De Niro Sr., the man and the artist, apart from so many in the art world of the time.

“What does one say of those with a clear sense of vocation and manifest promise who are passed over in the final judgment? Or, to put in more narrowly professional terms, what of those blessed with talent and drive who attract notice for those very qualities but are soon eclipsed by colleagues equally if not more talented and driven, peers who are chosen by a consensus of taste to represent their time? What becomes of those who are picked up, approvingly examined by public opinion, and then, for a host of elusive reasons, dropped and left to their own devices? How do they muster the courage and stamina to carry on despite the disappointment that inevitably results from being seduced and abandoned by fame in this manner?”

Perhaps a fitting answer to that question came in the 90s, shortly before Robert De Niro Sr.’s death, when his son, actor Robert De Niro, decided it was time to rescue his father’s legacy, to reacquaint people with his father’s considerable body of work. This book, the first comprehensive monograph of the artist’s work, is the latest instance of that effort.

“It has been important to me to preserve my father’s artistic legacy, to tell the story of his life and his art, and to make sure that they are known and understood by my family, my children and grandchildren. I have kept his studio as it was during his lifetime, so that they will have a sense of what this man—their grandfather, their-great grandfather—did there, and, ultimately, of who he was. What he accomplished in his art was uniquely his and will carry on, as far as I'm concerned, forever. I remember as a kid being in his studio and listening to him talk about dealers and artists, and the great works of art and literature he loved, and I understood, even at that young age, that my father was passionate about what he did.”

Robert De Niro Sr.: Paintings, Drawings, and Writings 1942–1993 encompasses five decades of the artist’s work, with over 100 full-color plates, never before published writings, images of him and his son, ephemera, and insights into what life was like in New York for a painter of his time, as divided into two big timelines, 1942 to 1965, and 1966 until his death in 1993.

It’s a hefty book, both in size and content, and it is a satisfying one, as appropriate for art connoisseurs as for people just getting acquainted with De Niro Sr., considered an important member of the New York School of York School of painters, along with Willem de Kooning and Jackson Pollock, and a  major contributor to postwar American art, with work currently sitting in the permanent collections of institutions such as the Metropolitan Museum of Art, the Brooklyn Museum, the Smithsonian American Art Museum, the Hirshhorn Museum and Sculpture Garden, the Corcoran Gallery of Art, and the Whitney Museum of American Art.

In the end, what could a thoughtful reader expect to come away with after reading and experiencing this book? Well, one could reasonably assume they’d come away knowing that any first impression of Robert De Niro Sr.’s work as derivative of European masters like Delacroix and Matisse, would be a mistaken one. That there was innovation and achievement in his very personal interpretation of the art movements of his time, and that there was courage and conviction in his decision to eschew the title of abstraction that so many of his peers pursued in favor of a lifelong commitment to the tradition of representational painting and drawing that he was passionate about until his last day.