The Road to Burgundy: The Unlikely Story of an American Making Wine and a New Life in France 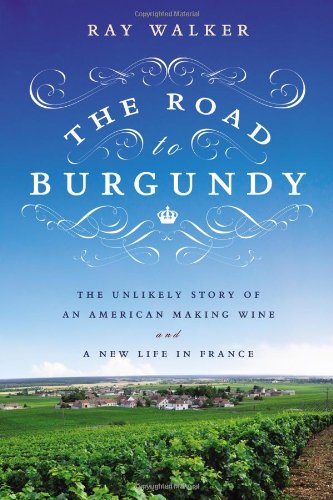 Here is an amazing tale of the combination of perseverance and luck. It is an object lesson in the ability of someone with no winemaking experience to be able to make world class wine on the strength of serious book study.

The Road to Burgundy is a first-person account of Ray Walker, as he went from someone who knew nothing and cared less about wine to someone whose first vintage included grapes from the Grand Cru vineyard Chambertin. The luck and coincidences he encounters read like a novel, with him being saved at the last minute several times. But his story checks out. Ray Walker really does make Burgundy.

Ray Walker worked in the financial services industry. He did not come from a wine family, and he viewed wine as somewhat decadent. Then he took a trip to Italy with his wife to be. On their last night there, in Florence, they went into a local trattoria. Wine was a normal part of the cuisine, and it went very well with the food. Ray was hooked.

Back home, he dived right into book learning about wine, and came to the conclusion that he should concentrate on Bordeaux. So they bought Bordeaux after Bordeaux, and tried to like them. But they just did not.

Then they to a wine shop that they thought was doing a tasting of Bordeaux, but was doing a tasting of Burgundies. They had never been into a wine shop (buying all their Bordeaux online), and had never tasted a Burgundy before, and knew nothing about them, having glossed over the Burgundy part of all his wine books. But they discovered right then and there that Burgundy, especially red Burgundy, was the wine for them.

Ray was entranced by the notion that wine from one vineyard would taste different than wine from the next vineyard over. The mysterious terroir. He became about as wine obsessed as one can become. But instead of being content like most of us with being obsessed with drinking wine, he became obsessed with the notion of making wine.

His wife was pregnant, and he was training to be a financial adviser. But he quit his job and tried to find work in a winery. Most amazing of all, his wife backed him up.

No question, Ray worked very hard at this. He called many people and tried many ways to get an entry-level winery job. Then someone gave him one, and he learned how to clean out equipment. That was the extent of his experience before he decided he wanted to buy grapes in Burgundy and make wine.

Then it was a matter of trying to get investors. Again, he called all over, and, suddenly, one gave him money just like that. He spent a lot of time trying to learn French, but had a lot of trouble convincing anyone to sell him grapes.

Ray traveled to Burgundy with his wife, and bumped along, not sure what to do, but they stumbled onto a hotel in Chassagne-Montrachet, which happened to be run by a member of the Leflaive family, producers of prestigious Burgundies. One of many happy coincidences that helped him along.

To make a long story short, a lot of persistence plus a lot of luck put Ray in possession of grapes from some of the most prestigious vineyards in Burgundy, plus the 100,000 Euros to pay for them. With no experience actually making wine, but with a lot of book studying (including a number of 19th Century texts in French on winemaking) plus some help, he made several barrels of Burgundy, trying as much as possible to follow the old ways of making wine. And, people who heard about him online wanted to buy his wine.

Throughout the book Ray emphasizes how remarkable it is that Burgundians would help an American with only rudimentary French acquire the grapes to make fine wine. There is not the slightest hint in the book that Ray Walker is also African American. That was not a barrier at all, at least as he recounts it.

While reading The Road to Burgundy, readers who were not already familiar with Burgundy would get the basics of the Burgundy system and what makes Burgundy so special. Readers would also get some background in winemaking. But the main appeal is the amazing story of how someone was able to realize his seemingly farfetched dream.

Ray Walker producers only a small amount of Burgundy each year, and his wine costs several hundred dollars per bottle. Few of us are likely to ever get to taste his wine. But we can still enjoy his unlikely Road.