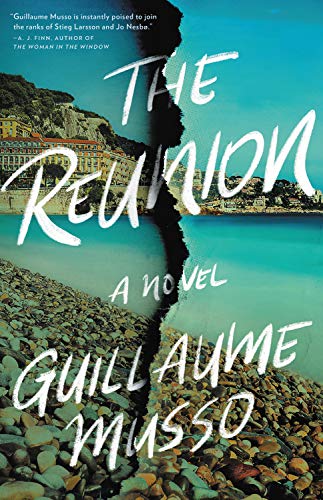 “The Reunion is the type of story you could stay up all night reading. From the lush atmosphere to the mysterious conclusion, there’s nothing to not love about this novel.”

There are few places in the world more romantic or more romanticized than the French Riviera. For the central characters in Guillaume Musso’s The Reunion, the French Riviera is home. It is also the scene of an unsolved crime, for back during the days of grunge in 1992, a double murder happened at their school (Lycee Saint-Exupery) that forever altered the course of their lives and the lives of their families.

Although told from several different perspectives, the main protagonist in this crime thriller is the novelist Thomas Degalais. Thomas is quite hip for a man in his forties—he dresses well, is well-read, and lives in New York City. He’s a famous writer. In short, he’s not that much different from Musso himself. Well, that is except that he committed murder in 1992. Thomas goes back to his school’s reunion not to reminisce, but rather to try and keep the body of his victim from being unearthed during a planned renovation of the school’s gym. This problem and his attempt to clean it up causes Thomas a whole life’s worth of violence, death, and betrayal.

Thomas’s literal partner-in-crime is Maxime Biancardini, the son of a local mobster who grew up to be a politician representing the party of President Emmanuel Macron. On that snowy day in 1992, Maxime and Thomas killed Alexis Clement, a German philosophy teacher accused of raping and impregnating the American student Vinca Rockwell. On that same day Vinca went missing. Or did she die? The former student most convinced that Vinca was murdered is Stephane Pianelli, a journalist with Nice-Matin and an insufferable Marxist. Although all three men are friends, their respective quests lead them toward conflict.

Although she is dead throughput the novel, Vinca is one of the more powerful and alluring characters. Unlike most femme fatales, Vinca may have a dark side, but she is still the story’s victim, not its perpetrator. Most of all, Vinca serves as the point of obsession for Thomas, Stephane, and others in this novel.

The Reunion is, to lift a phrase so often used by Stephane, a “potboiler.” This is a thriller with more twists and turns than the Moyenne Corniche. As befitting something set among France’s well-heeled liberal elite, The Reunion is chock full of infidelity, sexual intrigue, and vulgar displays of (financial) power. It is also a book about the past, specifically the hidden past. You see, the crime at the center of this story moves from being straightforward to incredibly complicated. Its true nature is not revealed in full until the final 20 or so pages.

The Reunion is an excellent introduction to Musso’s work for Anglophone readers. There is a reason why Musso is one of the most popular French novelists—his writing is sharp, witty, and punchy. While some of the characters in this novel border on being caricatures (Stephane, for example), the main protagonist is fully fleshed and three-dimensional.

Better yet, The Reunion is the type of story you could stay up all night reading. From the lush atmosphere to the mysterious conclusion, there’s nothing to not love about this novel.