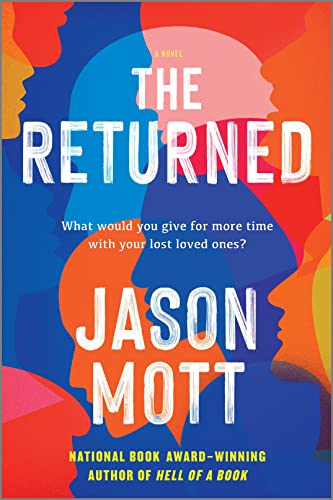 “The novel is fascinating, the premise intriguing. It’s a story that readers will find difficult to put down . . . With such a powerful debut novel, Jason Mott has set the bar very high for his next book.”

An award-winning writer with two poetry collections in print and a nomination in 2009 for a Pushcart Prize, author Jason Mott adds another accolade to his assemblage with his debut novel The Returned. ABC has chosen his story for a 2014 television series.

Picture a small town where life is simple and highly predictable. The inhabitants know each other, their strengths and weakness, their successes and failures. Not much happens in Arcadia, North Carolina, that townspeople don’t find out about. Secrets rarely remain secret. Life is as smooth as water in a pond in this quintessential Maybery-esque little community.

That serenity ends one day when an elderly couple, Lucille and Harold, answer a knock at their door only to find their eight-year-old son standing on their porch. No surprise here—unless that youngster died on his eighth birthday—in 1966.

The parents don’t know what to think about their son, Jacob. They question whether he is indeed the same boy who drowned decades ago in the nearby river after sneaking away from his birthday celebration. Nevertheless, they accept him as their son, and thus begins an incredible saga of people just like Jacob returning from the dead.

This anomaly, or as some call it, this miracle, begins to burgeon all over the world. “The Returned,” as they’re called, inexplicably begin to appear in alarming numbers causing the government and military to become involved. Soon internment camps spring up to house those who’ve returned from the dead. The entire town Arcadia is cordoned off with fences and armed guards, and underground groups begin to appear whose mission is to eliminate those who have come back to life.

Meanwhile, Harold and Lucille have never fully recovered from losing their only child. They’ve grown accustomed to an empty house and their deep wounds have scarred over. It seems through a strange twist of fate that the couple has been given a second chance . . . or is it “The Returned” who’ve been given that chance?

In the eye of this growing storm is Agent Bellamy, a government man in charge of Arcadia and its Returned. A likeable character, Bellamy has an agenda and a secret of his own, one that is revealed to the reader at the end of the story.

The novel is fascinating, the premise intriguing. It’s a story that readers will find difficult to put down, even though it leaves some unanswered questions. Why do certain deceased people come back and not others? Why have they returned? Where have they been? And one big unresolved question: Why aren’t any of “The Returned” able to describe how they died? One family was murdered yet fails to tell anyone who the murderer was. Strange.

Those questions notwithstanding, the story instantly grabs hold and sucks the reader in, causing one to read more than first intended. There are breaks throughout the book wherein the author pauses to introduce a few of The Returned. It serves to personalize some of the characters.

At the end of the book, Mott supplies the reader with an Author’s Note page. In it, he explains his motivation for writing the story. My sense is that if one were to read that section first, it would answer some of the questions that are bound to arise.

With such a powerful debut novel, Jason Mott has set the bar very high for his next book.