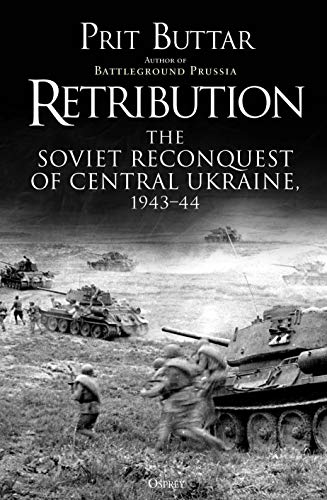 “an excellent strategic and operational analysis of this mostly ignored campaign . . .”

The so-called “Russian Front” has been mostly overlooked by Western historiography of both World Wars. Prit Buttar is on a singular quest to correct this oversight, publishing four books on the Eastern front from 1914–1921, and now his fourth book on the massive struggle between Hitler and Stalin in World War II.

This volume covers the Red Army offensives to recover the Ukraine after turning back the final great German offensive at Kursk in July 1943. The Soviet summer campaign was focused on exploiting the disarray of the Germans to recover the vital cities of Kharkov and Kiev and push the Germans back to the pre-war frontiers.

The book interweaves a number of personal narratives from both sides with traditional battlefield narrative, showing the desperate and often close quarters combat of that summer’s fighting across the steppes. The German Army was clearly on both the strategic and tactical defensive, yet in spite of the heavy losses of both men and material at Kursk, the Germans were able to mostly conduct a deliberate retreat in the face of heavy Red Army attacks. The micro-management of Adolf Hitler continued to adversely affect German operations, particularly his ridiculous fight to the last man orders, but tactical reality soon came to the fore, and German forces were soon conducting more deliberate retreats, both to shorten their lines and free up forces for local counterattacks.

The growing operational skill of the Red Army can also be seen in the narrative, as Soviet commanders become more adept at handling combined arms combat and shifting their forces to take advantage of local breakthroughs. Numbers, of course, also begin to play an increasing role in Soviet operational success as well. Although sharp counterattacks by German panzer units blunted several of the Soviet thrusts, the Germans became trapped in an attritional struggle they could not win. Their mobile forces could delay but not stop the inexorable Red Army as the Germans desperately tried to hold ground considered economically vital by Hitler.

However, not even the defensive barriers of the Donets and Dneipr Rivers slowed down the Soviets for long as they were able to force crossings and continue to one of their major objectives of the campaign, the liberation of Kiev, third largest city in the Soviet Union. Fortunately for the beleaguered Germans, as Buttar points out in his analysis, the vast distances involved and the sheer scale of Soviet operations, combined with heavy losses of men and tanks, overwhelmed even the Soviet logistic system and the years’s campaign soon came to a close with the Germans nearly driven out of Ukraine but with their armies battered but mostly intact.

Beyond the amazing level of operational detail and the well interspersed personal recollections, Buttar performs an excellent strategic and operational analysis of this mostly ignored campaign. Strategically, the year was a watershed by placing the Germans on the permanent defensive and continuing the rise of the Red Army juggernaut that would capture Berlin within 18 months. Although the Germans continued to exhibit excellent tactical prowess and inflict significantly more casualties on the Soviets, the weight of men and material, combined with the ability to maintain a multi-axis offensive quickly overwhelmed the German ability to use mechanized units to stabilize the front—a pattern that would be even more noticeable in 1944.

The 1943 post-Kursk fighting is often overlooked by Western historians as the Americanas and British forces began their assault on Sicily and the Italian Peninsula. But as this volume shows, both the hard fighting and hard lessons learned on the open steppes and cities of Ukraine emboldened and enabled the Red Army for the 1944 campaign that would finally drive the German Wehrmacht out of Soviet Russia and ultimately into Eastern Europe and Germany. This book fills a critical operational history gap between the great Battle of Kursk and the Soviet 1944 summer offensive Operation Bagration.