#Republic: Divided Democracy in the Age of Social Media 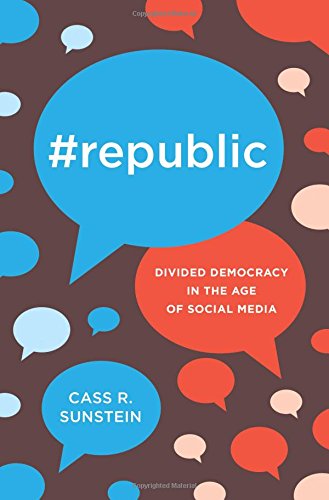 Cass Sunstein’s latest, #Republic: Divided Democracy in the Age of Social Media, is a broad overview of the ways that social media is affecting the health and vitality of contemporary American democracy.

The assessment is not a positive one. Like many observers and scholars, Sunstein combines scholarly research and democratic theory to argue that the prevalence of social media as a primary means of political discussion allows for the creation of echo chambers that serve to polarize and then to intensify the political views of American citizens. This, in turn, weakens the quality of democratic discourse and makes it difficult for us to find common-ground solutions to the biggest problems facing our society.

While this is not a novel conclusion, the value of Sunstein’s contribution is in his prescriptive recommendations. The first is to find a way to introduce more “serendipity” into our daily social interactions: we can take steps to expose ourselves to information, perspectives, and individuals that we did not deliberately seek out.

According to Sunstein, “unplanned, unanticipated encounters are central to democracy itself. Such encounters often involve topics and points of view that people have not sought out, and perhaps find quite irritating–but that might nevertheless change their lives in fundamental ways.”

As an example, Sunstein’s proposes that Facebook introduce a “serendipity button” which would introduce content into a user’s news feed from random journalism outlets. “With serendipity buttons,” he writes, “Facebook users could think, I am here in large part to learn. What can I find out?”

Sunstein’s second substantive recommendation is to increase the frequency and quality of common experiences in society. “Without shared experiences, a heterogeneous society will have a much more difficult time addressing social problems. People may even find it hard to understand one another.” These shared experiences produce the “social glue” that helps facilitate mutual trust and identity in a society, even in the face of strongly held opposing viewpoints.

Sunstein argues that these public forms are an essential component of freedom because “freedom properly understood consists not simply in the satisfaction of whatever preferences people have but also in the chance to have preferences and beliefs formed . . . after exposure to a sufficient amount of information as well as an appropriately wide and diverse range of options.”

As one way to achieve this goal, he argues for the creation of more robust online public discussion forums where citizens could go to learn about social and political topics as well as to deliberate the merits of various governmental policies in an open, transparent, and public arena.

While many similar forums already exist in online social media platforms, they tend to be focused on a narrow topic and draw only like-minded partisans. Sunstein, in contrast, proposes that these forums cultivate broader and more diverse constituencies as a way to strengthen our shared democratic decision-making habits and processes.

There are two specific critiques of #Republic. The first is that the author takes it as a premise that “deliberative democracy” is the ideal expression of democratic association in American society. While the premise is taken for granted throughout the book, many scholars and political philosophers have registered strong critiques of the deliberative democracy school of thought, which are unacknowledged by the author.

Further, many political scientists have argued that deliberative democracy, while perhaps normatively desirable as an ideal, is simply impractical given the widespread ignorance of basic political concepts and disinterest in civic affairs shown by wide swaths of the population. That said, Sunstein feels that deliberative democracy is worth the effort to strive for as an ideal, even if the results frequently come up short.

Second, political science research by Diana Mutz on deliberative democracy has shown that the type of deliberative dialogue recommended by Sunstein can actually depress democratic participation when it comes to electoral politics (see her 2006 book Hearing the Other Side). Specifically, those who spend more time talking with people they disagree with and having “cross-cutting” discussions are also less likely to vote, donate to candidates, or volunteer with political campaigns. This is because those who spend more time talking to those they disagree with are less certain or more nuanced about their own views and are thus sometimes less enthusiastic to show up to vote or spend their time advocating for a cause that they are more ambivalent about.

To his credit, Sunstein acknowledges this point. The author downplays the significance of this research and its implications for the central thesis of his book. If Mutz’s conclusions are correct, a political world where Sunstein’s proposals are fully realized would be one where people are better informed and more empathetic and understanding of their neighbors, but also one where an even smaller portion of the population shows up to vote on Election Day and gets involved in electoral politics. Would we as a society be happy with such a trade-off? These questions remain unexplored in #Republic.

That said, #Republic is an excellent assessment of how social psychology, technology, and politics are colliding to produce the extreme and polarized discourse that has come to dominate our contemporary political environment. Its accessible prose and clear organization make it a solid pick for political science courses as well as citizens who want to better understand how technology is changing the way we think and talk about politics in today’s world.

Ultimately, if you do nothing else than spend a few minutes each day considering news and perspectives from outlets that usually drive you nuts while asking yourself “What can I learn from this?” The author would consider that a win and our democratic experiment would be better for it.