The Reprisal: A Novel 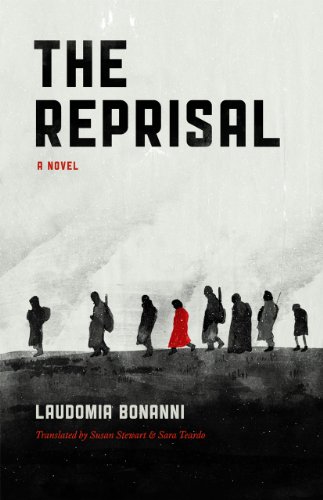 “The Reprisal drags wartime cruelty out of the shadows. This translation should do the same for Laudomia Bonanni’s fierce fiction.”

“The writer is a fearless spectator,” notes the unnamed teacher and narrator of this dark, meticulously constructed novel that leads us down into the hell of World War II.

As rampant attacks scar the lawless countryside, a bedraggled band of fascists huddles in an isolated mountain refuge in Abruzzo, Italy, in the winter of 1943. The reader finds himself in a shadowy realm in The Reprisal, where tragedy comes swiftly, needlessly, inevitably. We have no choice but to follow an unreliable and ethically compromised guide, who, unlike Dante’s Virgil, apparently deserves to be consigned to the Dark Plain that precedes the nine circles of hell.

The narrator’s role as guide parallels that of the author, Laudomia Bonanni. She, too, lived as a teacher and as a witness to a world warped by fear, patriarchy, and violence.

Born in the lofty old city of L’Aquila, the capital of Abruzzo in central Italy, Laudomia Bonanni was a master of Italian postwar realism. She delved into her experiences of teaching in Abruzzo’s remote mountain village schools to create one prize-winning short-story collection after another.

In addition to teaching, she was a journalist, adept at spinning her research and observations into acclaimed fiction. Despite her earlier successes, her last novel, La rappresaglia, completed in 1985, was never published in her lifetime, and by the time of her death in 2002, few remembered or recognized her singular vision and talent.

For the first time, English-speaking readers can experience the power and lyrical beauty of Laudomia Bonanni’s fiction. This fluid translation by Susan Stewart, a poet, critic, and professor at Princeton University; and by Sara Teardo, a lecturer in the French and Italian departments at Princeton, serves to highlight this woman’s incisive work, which focuses on such timely and timeless themes as humanity’s use and abuse of power, the imbalance between men and women, and the conflict between justice and vengeance.

In a frigid, sparsely furnished hideaway that was once a monastery, we will encounter no pure hero and no sure salvation. The fascists, or Blackshirts, have captured a Red, a partisan woman whom, they quickly discover, will give birth in a matter of weeks. The only name we know her by is the nickname the fascists give her: La Rossa, (meaning “the red”). Tellingly, they also call her a slut, a devil, and a monument because of her enormous belly.

With her flaming hair, her radical pronouncements, and her pregnant, unwed state, La Rossa is the outsider of their nightmares. Her vitality and passion evoke a power that makes these captors cringe inside. Not knowing what to do with their unexpected enemy, they decide to hold their own war tribunal.

The startling visual images called forth by the dinner preceding that event make it clear her life will be sacrificed:

“The funereal, cloaked prisoner” sits at one end of the table, while the others line up at either side of her, “the candlelight flickering off their cheeks, foreheads, yellow noses, Vanzi’s deadly pale bald head, the icy, golden flashes of Alleluia’s earrings. And fleeting sights of stray, bloodlike streaks remaining from the frescoes on the whitewashed walls. The boiled potatoes, piled up in the plates, had the shape and hue of remnants from an anatomy theater. There was only the mountain fireplace’s ravenous hunger, the emptiness of fatigue and agitation.”

To the choir stalls they walk, two by two, like friars. Their passive fear—of exactly what, we never learn—is converted to an act of retribution—but not by the leader Vanzi. Rather, the Judas of the group is the lively young orphan Nirli. He claims he saw her the night his home was torched, leaving him scarred and orphaned. Others chime in with other circumstantial evidence, and all too quickly they become committed to killing her after her baby is born.

As is typical of wartime, the men defy the Biblical injunction, “Dearly beloved, avenge not yourselves, but rather give place unto wrath: for it is written, Vengeance is mine; I will repay, says the Lord” (Romans 12:19). For the sake of their own comfort, they pretend to a sanctity they do not have. What they have demonstrated, the author shows, is a helter skelter morality whipped up by fear and a lust for punishment.

Moral degradation and a cruel randomness have defiled the choir stalls where harmony once reigned. The reader can hear strains of William Butler Yeats’ “The Second Coming,” in which he reveals the center cannot hold when humans fall into raging fanaticism.

Ms. Bonanni goes on to associate this state with the amoral existence of animals. In fact, she ranks such behavior below that of beasts, for only humans have invented and pursued a cycle of retribution.

The author shines her unsparing light on a number of turning points where the group might have broken that tragic pattern. One hopeful development is the arrival of a young priest, Don Antonio, who decides to stay to help her. As a sign of respect for the priest, Vanzi is willing to be led by him, but Don Antonio is somehow never able to capitalize on that possibility.

Don Antonio illustrates the weakness of organized religion, particularly in wartime. The priest, though he befriends La Rossa, does not have the power to save her body or her soul. Neither can he prevent the tragic consequences the fascists will reap for murdering the woman.

The unique structure of this novel calls to mind Dante’s Inferno, the first book of The Divine Comedy, which divides hell into 10 major sections. Similarly, Ms. Bonanni uses 10 chapters to explore a particular hell in her homeland. (The translators note that the execution of a pregnant partisan seems to have no basis in fact, but the mountain refuge, the fears, conflicts, and miserable living conditions have been drawn from real life.)

In addition, Ms. Bananni uses six numbered parts for each chapter. Perhaps she meant to evoke Dante’s Circle 6 of hell, where Dante and Virgil enter the capital of hell and encounter heretics who do not believe in eternal life and are condemned to eternal death in red-hot tombs. These inhabitants cannot see the present, but are granted enough light to see the distant future.

The author does not spare the fascists from their own bleak future, illustrating the Biblical conception of God’s judgment: “He will by no means leave the guilty unpunished, visiting the iniquity of fathers on the children and on the grandchildren to the third and fourth generations" (Exodus 34:7).

[SPOILER ALERT:]
In the closing chapter, only the narrator survives—and he is haunted by doubts and the bitter stench of events he witnessed but did nothing to stop.

The Reprisal drags wartime cruelty out of the shadows. This translation should do the same for Laudomia Bonanni’s fierce fiction.