The Remarkable Rise of Eliza Jumel: A Story of Marriage and Money in the Early Republic 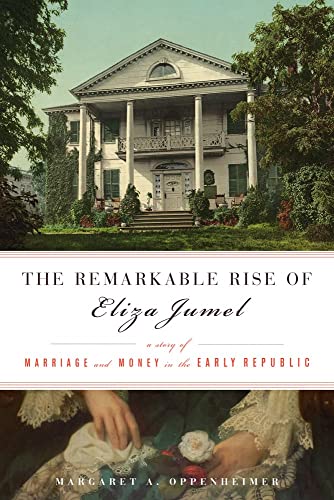 The Remarkable Rise of Eliza Jumel: A Story of Marriage and Money in the Early Republic by Margaret A. Oppenheimer has something for every reader: sex, scandal, legal battles, marriage, divorce, famous characters, and gossip.

Eliza Jumel is one of those historical figures not found in any traditional history book. Born to a prostitute, raised in a bordello, she spent time as an indentured servant as a child, married well, rose through society’s ranks and died worth millions (in present day dollars). Her life transcends the years following the American Revolution and through the end of the Civil War.

During her life, Eliza Jumel fell in love with and married a Frenchman with whom she amassed a considerable fortune. After his death, she met and married Aaron Burr, a former U.S. vice president and notorious scoundrel whose infamy stems from being responsible for killing Alexander Hamilton, the nation’s first secretary of the treasury, in a duel. The first marriage lasted decades—the second less than a year.

Her background notwithstanding, Eliza Jumel showed herself to be an astute businesswoman with a shrewd knack for protecting her own interests and future—usually at the expense of her husbands.

Oppenheimer presents this woman in intricate detail. And that is one of the drawbacks of this book. The author is painstaking in the recitation of mundane and often unimportant facts. Fortunately, this predilection to overwhelm the reader with the minutiae of Jumel’s life wanes in the latter half of the book. And that results in a more pleasurable reading experience.

Leaving the exasperating specificity of facts behind, Oppenheimer allows Jumel’s narrative to race ahead like the “four greys and a barouche with a seat behind” she preferred while spending summers in Saratoga Springs.

Throughout her life, Jumel found herself embroiled in lawsuits involving her debtors and creditors. She bought and sold property, hired and fired advisors, leased houses and paid off mortgages. The woman was a firebrand when it came to high finance and real estate holdings.

She met her match when she accepted Aaron Burr’s marriage proposal. He was in his 70s, she in her late 50s. He wanted her money; she knew his name would open doors to the highest levels of New York society. The marriage hardly qualified as the proverbial heavenly match.

The law did not protect wives or their property. Once she married Burr, all of her property became his, and he was quick to take advantage of his husbandly privileges. Burr was a spendthrift, and even though he was considered a brilliant lawyer he rarely had two nickels to rub together. He took his wife’s property and spent freely. Within months, Eliza knew he had to go. Based on Oppenheimer’s research, the feeling was mutual.

Jumel filed for divorce and presented evidence of Burr’s adultery because that was the sole ground on which a divorce could be granted. In the process, she destroyed one woman and convinced another to lie.

Burr, on the other hand, was not eager to lose his golden goose. The gavel sounded, and the legal fight was on.

The story of Eliza Jumel is remarkable. Yet what happened after she died may be the most interesting part of the story.

Eliza Jumel died in July 1865 and left behind an estate worth $1 million dollars—that translates to $15 million in 2015 dollars if you use the consumer price index to compare. Her will named charities as the main heirs to the estate; her relatives were either disinherited or received significantly less than they expected, which triggered years of litigation filed by those heirs.

But the litigation did not end there. Others popped out of the woodwork to claim a share of the estate. These ersatz heirs came from New England and abroad. Some Eliza knew and others claimed a kinship that was based on fantasy and perjury.

This book will appeal to a variety of readers. Those with a penchant for American history will enjoy the insights into the early years of the United States. Readers who thrive on stories about strong, independent women will find a kindred soul in Eliza Jumel. And those who think the court system is out of control will, no doubt, relish the tactics used by long-ago lawyers aggressively representing their client’s interests.

One final note, anyone reading this book will come away with one enduring lesson: what can happen when you die with lots of money and lots of people that want a piece of that estate plan pie.

The author has presented a yarn worth staying up for to read. At times it can be tedious—because the author is a historian and sometimes they get caught up in the weeds of the past—however, read on as the second half of the book is fascinating.