The Relic Master: A Novel 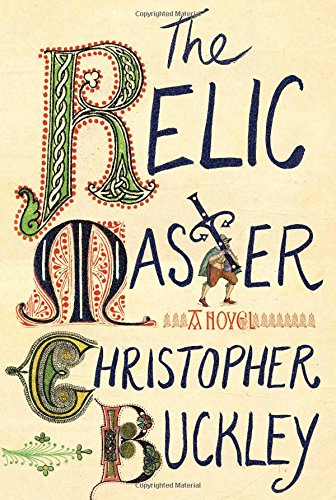 Ever wish Monty Python had written a novel? Or perhaps more specifically that Terry Jones’s astute historical knowledge had turned to the Holy Roman Empire right at the cusp of Reformation? If so, The Relic Master is here. With laugh out loud humor, witty dialogue, and a true sense of historical detail, author Christopher Buckley has created a work of farcical art in this fast-paced adventure.

Dismas, former Swiss mercenary and monk, is a relic collector, and an honest one at that. Following his own ethical standards, such as whether or not the relic on sale has had miracles attributed to it, gives off a perfumed smell, and if the saint allowed it to be removed from its original resting place, Dismas attends the relic fair in Basel to purchase holy relics for wealthy clients, only to be disappointed by the influx of fakes and hoaxes brought on by the upswing of the indulgence sales of the Catholic Church: “He noted with amusement two adjoining booths, each advertising thorns from the Crown of Thorns. Unfortunate placement. But there were so many exhibitors these days. Space was tight” (8). Dismas has a list of much-sought-after holy relics, and in a combination of his knowledge of theology and how holy relics should appear, he uses his own reasoning: St. Peter’s boat on sale at Basel has worm holes from saltwater, which strikes him as mighty suspicious for a fisherman on a freshwater lake.

Dismas purchases holy relics for his wealthy clients, Albrecht of Brandenburg, whom he politely dislikes, and Frederick “The Wise,” whom he calls “uncle.” Albrecht is in competition to outdo the collection of Frederick III, who in turn seems to be trying to outstrip the Vatican in number. Both Albrecht and Frederick III sell access to the relics as indulgences—the chance to get yourself or a loved one out of Purgatory a little quicker. It’s 1517, and Martin Luther has nailed his famous Ninety-Five Theses to the cathedral door, so suddenly the indulgence game seems to be on the wane, threatening Dismas’ livelihood. Frederick “The Wise” isn’t taking Martin Luther seriously, and he isn’t handing him over to anyone for punishment either.

Thinking to retire to the Alps, Dismas discovers his retirement money has been embezzled. Meanwhile, Albrecht Durer, loving called Nars after Narcissus because of his habit of putting his face in just about every painting made (“I paint beauty wherever I find it. If I find it in a mirror, so be it”), suggests creating a burial cloth of Christ and selling it to Albrecht of Brandeburg, the power-hungry patron Dismas politely calls “cousin.” The idea of the shroud sounds like a very good one for making Dismas’ money back. When the book opens, the tomb of Pope Leo X has been opened and a second Shroud of Turin has been discovered, with the Vatican withholding comment on this surprise.

The story leaps off the pages like the brilliantly, beautifully, and naughtily illuminated Bible pages carefully done by the monks of yore. With historical figures fantastically sculpted out of words and brought to life—Frederick III, Albrecht of Brandenburg, Johann Tetzel, and others—any history major will be sucked in trying to determine fact from fiction. For those who aren’t as attached to learning about history, they will love every minute of this rollicking good ride.

At the back of the book are appendices on names, dates, and historical details as well as a set of sources.