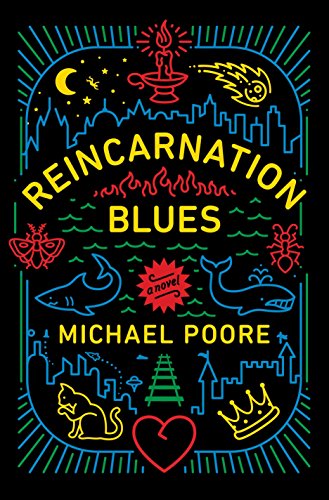 "reads like a writer having fun, which is always good to experience."

For a book mostly about dying, Reincarnation Blues is surprisingly light and uplifting. Milo has lived most of his allotted ten thousand lives; it's the same number everyone gets, and by the end a person is meant to have achieved perfection. Most people don't need all ten thousand to get there, but Milo has only five left and hasn't achieved it yet. Probably because he is in love with Suzie, one of the entities that is Death, and after each life, he gets to see her. When he's told that he has to achieve perfection before the end of that last life or he gets tossed into oblivion, he and Suzie come up with a plan.

The main story happens in the afterlife between his lives, where he's figuring out what went right and wrong in each time on earth, but since time isn't linear from the point of view of the afterlife, the book gets to be really creative with the stories of the lives he's lived. There are lives in the past in any number of different countries. There are lives in the present, big ones and small ones. There are lives in the far future, and those are often the ones looked at the longest: snapshots of what it's like when humans move out of the home planet and colonize the galaxy, and the large numbers of injustices that can happen in that situation.

Milo is the oldest soul around, with more lives than anyone, so his stories intersect and overlap in interesting ways, and the effect builds beautifully into a very satisfying ending. It's a perfect structural choice, and it gives the book a sort of freewheeling freedom that a linear story wouldn't have had, while also allowing it to be one book under 400 pages, and not a seven-book series. It's a quick read, and most of it is breezy and fun, with a few punches to the gut along the way.

The tone of the book keeps it from being oppressive with all its talk of death. From the very beginning it's a little irreverent and has a fantastically good eye for the absurdity of life as well as death. It's often very funny, even when it's piling on the emotions, and it manages to make the oddest things touching. Bonus points for being mostly a quiet sort of humor that stays out of it's own way and lets Milo and his development be the point—as it should be, since he's the main character.

And at the root of it, it's a book about love and trying to do right by the ones you love. It's about fate and free will, and about how we want the world to make more sense than it actually does. It's about the little things that make a life worth living and a death worth dying, and about having to figure it out as you go.

And despite being literally about all the ways this one person has died over and over throughout history, and having Death as a main character, it's not about death the way books usually are; death is just part of the story, and this makes it less scary though not less emotional.

Poore has given us a series of lives and made them all interesting, whether it's a small uneventful one or a massively important one, and in between, he gives us a fantastical afterlife that is as real as all the lives, historical and future, that we're shown.

The overall effect is charming, the book stands on its own, and it straddles that line between literary and scifi well (with heavy leaning on the scifi side), doing justice to both genres. And it reads like a writer having fun, which is always good to experience.