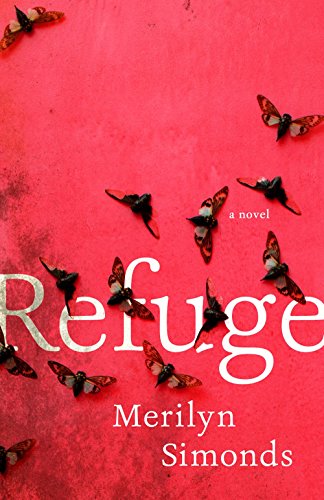 “a moving and deeply satisfying tale.”

It is said of literature that there are only two plots: someone goes on a journey or a stranger comes to town. Canadian author Merilyn Simonds’s heart-warming new novel, Refuge, brilliantly follows the latter formula.

The stranger in this case is a young woman from Myanmar, Nang Aung Myaing, who arrives at the remote cabin of 90-year-old Cass McCallum claiming to be the old woman’s great-granddaughter. The remainder of the book explores, through Cass’s recollections, how the young woman’s story might be true and whether Nang will successfully find refuge in Canada.

Cass, born in 1905, was the last of nine daughters of a Canadian farmer and his wife, who died while Cass was still an infant. As she grew, her father cultivated her scientific curiosity, which eventually led to her study of nursing. She followed a nursing school friend to Mexico, where she fell in love with a married man, returning north when she discovered she was pregnant.

Feigning widowhood and taking on a new name, she found solace in the anonymity of New York City, working in medicine and raising her son, Charlie. When a polio epidemic broke out, she sent Charlie back to the care of her older sister, May, on the farm in Canada. During World War II, he joined the Royal Canadian Air Force and was lost on a mission over Burma, and Cass settled back on the farm.

Now the question is what will become of Nang, who has fled the political and social turmoil of Myanmar. Will Canada grant her refugee status? Or will she be able to establish that Charlie was her grandfather and thus obtain Canadian citizenship by right of birth? And in the meantime, will Cass tolerate this intrusion into her blissful solitude?

This is the great paradox of the novel: one person’s refuge is another’s invasion of privacy. Cass’s son was given refuge by Cass’s sister, his Aunt May, who at first was resentful of his presence but later grew close to him. Charlie then may also have found refuge in a Burmese village when his supply plane went down, despite the danger his appearance created for the villagers. And now Nang has arrived on Cass’s island over Cass’s protests.

Simonds explores these questions with a deliberately slow pace, interrupting the passage of the few days of Nang’s visit with frequent flashbacks, first to Cass’s girlhood on the farm, then to her stay in Mexico and the development of her art as a photographer, then to her nursing work in New York, and finally her retreat her Canadian home.

In addition to the theme of refuge, the novel explores the idea of the remembered past, both real and invented. Cass has reason to doubt Nang’s story because of her own manufactured history. On the train north from Mexico, pregnant and alone, she began speaking to of a husband who didn’t exist: “The husband was a surprise, even to her. He took on form and flesh as the train hurtled east. A tall man. Blond, she decided . . . By the time she stepped onto the platform at Grand Central Station in the city of New York, he was in his grave, the victim of an accident. Better yet, a disease. . . . Who was there to say any different?”

At the time, the fabricated story suited her purpose and helped to explain her presence in New York. Couldn’t Nang be similarly inventive now in order stake her claim to Cass’s help? Why should Cass believe her? And yet photography—an art that Cass and Nang share—seems to offer irrefutable evidence of the past. Or does it? What does it mean that Nang has in her possession a photograph of Charlie that Cass took?

The past also becomes present in the form of the preserved insects in Charlie’s collection—treasured by Cass and admired by Nang—as well as the artifacts and photographs of Cass’s old life with Charlie’s father that Nang’s presence inspires her to unpack and display.

In the traditional form of this plot, the arrival of the stranger raises a further question: Will the stranger stay? Ultimately, this is the question at the heart of Refuge. Will Cass allow Nang to stay? In building toward a possible answer, Simonds paints a portrait of two intriguing women who have more in common than is at first obvious. Without being overly sentimental, it’s a moving and deeply satisfying tale.