Reflections on a Coastal Garden 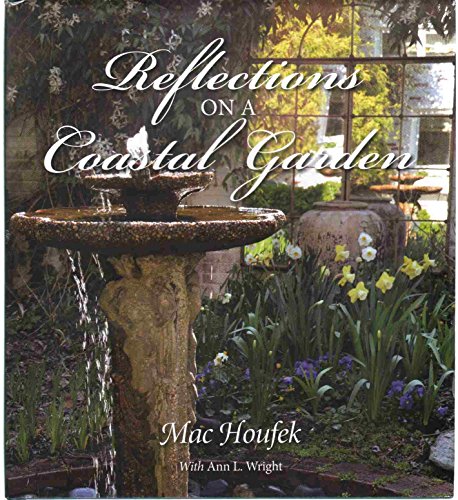 The publishing world has gone through a sea change in the past several years. With electronic books fairly easy to create and the quality and price of print-on-demand improving, any aspiring writer has access to the marketplace.

Mac Houfek’s lovely book, Reflections on a Coastal Garden, is an example of a self-published book that goes far beyond the poorly written and produced vanity books published by so many. This delightful illustrated volume describing how the author transformed her overgrown property in Virginia Beach, Virginia, into a beautiful garden, is beautifully written and rich with insights, inspiration, and information.

Houfek’s journey began 16 years ago when she and her husband purchased a home built in 1950 that had one and a half acres of unkempt, overgrown garden. The then 50-year old house was charming, but it was the potential of the land that drew Houfek to the property.

Houfek’s description of the plants she put underneath the craggy old trees gives the reader a sense of her creative skill using design, proportion, color, and pattern to her benefit: “Their open canopies provide dappled shade for hellebores, ferns, hostas, farfugiums and hydrangeas. For added interest at ground level, I thought a Japanese maple (Acer palmatum ‘Atropurpureum’) with its colorful foliage and delicate form would make an interesting contrast to the sheer mass of the tree trunks. Beneath the maple I made a carpet a chartreuse creeping jenny (Lysimachia nummularia), black mondo grass (Ophlopagon planiscapus ‘Nigrescens’) and peacock spike moss (Selaginella uncinata). Their colors and textures give punch to the whole bed.”

A visit from Chip Callaway, the renowned landscape architect who is based in Greensboro, North Carolina, inspired her to plant a “wine walk” through her wooded area. Putting the emphasis on variegated specimens, understory plants light up the paths that wend through the cool, shady woods. It’s a delightful place to stroll with a glass of wine on a warm summer evening.

In the course of her gardening work, Houfek discovered the benefits of garden rooms, outdoor spaces designed to human scale. She admits, “I’d never thought much about garden rooms until I had one.”

She describes the various “rooms” she created, carving out spaces within her plot for themed gardens such as an Oriental garden (15’ x 17’), a brick walled Charleston garden (24’ x 30’) visible from her porch, and a white garden (16’ long, width, which is narrower, not provided). The invaluable drawings of each of these gardens layouts include a numbered key to the plant list, making them helpful guides for anyone inspired to create a similar themed garden room.

Her explanation of the process of creating the white garden provides insights into how she works. Finding the existing herb-themed garden room tedious to keep attractive because of the growth habits of herbs, she decided she’d like a color-themed garden instead. Her mentor, perennial plant expert Linda Pinkham, suggested a white garden inspired by the world-renowned one created by Vita Sackville-West at Sissinghurst in Kent, England.

Houfek set about the project with determination, spending hours creating plant lists and searching for specific perennials that together would provide bloom throughout the growing season. Initially looking to create a symmetrical planting in each of the four corners created by two brick paths that intersect at 90 degrees, she, “quickly learned symmetrical plantings wouldn’t work because the light and shade were so different on the two ends of the 16’ space.” She wryly adds, “That’s when I decided that symmetry was overrated.”

The ongoing challenges of keeping the white garden did not daunt her. She writes, “It has suffered through many changes because white flowers are not always the easiest to grow. But I love my little homage to Sissinghurst and haven’t given up on it.”

A keen pruner, Houfek describes how she works to reveal the beautiful inner structure of a tree or shrub, a gardener’s version of what the sculptor Michelangelo described: “Every block of stone has a statue inside it and it is the task of the sculptor to discover it.” Her description should motivate any reluctant pruner who is afraid of massacring a plant. Houfek sums up the subject by saying, “Pruning is rewarding. I don’t think of it as work, but more as an opportunity to enjoy the peace of my garden and be creative.”

Part of the gardening process is problem solving, and Houfek gives multiple examples of thorny problems that once solved led to better design. For example, an enormous southern magnolia on her property was beautiful, but messy. The large, coarse leaves fall throughout the year, littering the garden planted underneath. She spent hours cleaning up before she could even start to garden underneath the tree. She was sorely tempted to cut it down, but hated to lose such a magnificent specimen.

The solution dawned on Houfek when she saw an old magnolia in Charleston, South Carolina. Every other branch had been removed, opening up the canopy and, with fewer branches, reducing debris. Working with an arborist, she directed from the ground as he cut out branches from her own tree, letting in more light and eliminating at least half the fallen leaves.

Over the years Houfek fell in and out of love with many plants. In the chapter titled Garden Favorites, she lists 30 that have stood the test of time in her garden, particularly ones that provide season-long interest. Ones that perform well throughout the year she considers “must-haves.”

Gardening is an ongoing process of learning, and Houfek is eager to be taught by her mistakes. She explains, “Learning by trial and error is an essential part of every gardener’s education. The results of my experiments haven’t always been what I wanted, but I never failed to learn from the experience.”

Houfek writes with an openness that makes you feel like a treasured guest, accompanying her through her remarkable garden. The passion, creativity, and intelligence that went into creating Houfek’s garden and writing this book are evident on every page. “Gardening,” writes Houfek, “is my time to work and play, to create to cultivate and make one little spot on earth nicer than I found it.” She could say the same about writing this charming, inspiring book.