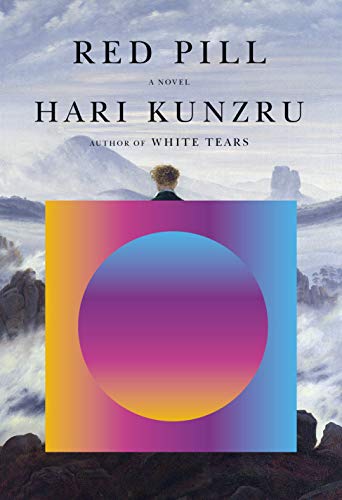 “Accept that you might have conventional horizons. Stop asking for life to be a poem. Why is it so difficult to speak plainly without allusions to books, films, and art?”

The American narrator of Red Pill arrives in the Berlin suburb of Wannsee for a three-month fellowship at its prestigious scholars’ center. Instead of writing the book stipulated in his grant, he hikes for hours on the estate grounds and binge-watches Blue Lives alone in his room, a violent cop show that becomes increasingly compelling in its bleak, brutish view of life.

On one of his walks he comes upon the grave of Heinrich von Kleist, the Romantic writer who killed himself on the shore of the Little Wannsee Lake after deciding that “no happiness was possible here on earth.” Across the Greater Wannsee Lake lies the villa in which the Nazis planned the Final Solution in 1942.

These ghosts stir the narrator to wonder whether his writing means anything at all.

Author Hari Kunzru, whose novels are widely translated, tackles the narrator’s existential questions as his grasp on reality erodes day by day. He comes to believe that the center’s administrators are recording him, monitoring his whereabouts, and assembling a dossier on his private life. Even the Porter tells him, “Everyone knows you are having problems with writing.” Personal belongings in his room appear to have been searched.

Back in New York the academic crowd had found him “vaguely disreputable.” A freelancer since age 23, he brims with self-doubt. Now in Wannsee he feels “something profoundly but subtly wrong,” not with the setting but with himself. He thought that the book, esoterically about the lyrical construction of the self, would solve the larger problem rising within himself.

Yet he keeps his distance, even from his own thoughts. Everyone has a place, a mental laboratory, he tells himself, “where we experiment with thoughts that are too strange or fragile to expose.”

A month passes with no work done. He must bolster himself with Scotch before heading down to dinner where he is obliged to socialize with fellow scholars. “How do you cope?” he asks the one resident with whom he’s become marginally friendly. “I space out,” the other answers. “Also I check Grinder all through dinner.”

After isolating for a second month the cleaning lady, a Stasi informer from the former East Germany, finally confronts him about his behavior. She shares her own story of ennui—taking the train, drinking, wandering around, drinking some more, hoping for something to happen while cursing the West. Echoing his paranoia she asks, “Who is it safe to speak to?”

He is unwilling to reach out to friends back home, but also unable to because “something happens to men in middle age, to male friendships. You fail to keep up.” His own “lyrical self” now feels an atrocious waste of years. He has labored under the assumption that the world is bearable—but what if it isn’t? What if the only sane reaction is endless, horrified screaming?

And then, a serendipitous acquaintance drags him to a party where he meets Anton, the creator of Blue Lives. Unnerved at meeting someone he has extensively Googled, he assails the TV show’s merciless vision. The cops have all lost their moral compass while the focus is on the victim’s terror, and viewers made to feel participants in their torture.

Then comes the “red pill” moment, referencing the scene in The Matrix that pulls aside the veil of superficial appearances to reveal a ghastly reality beneath it. Anton humiliates the narrator in public as a squeamish intellectual incapable of action. The narrator challenges him later again at a public lecture, only to be humiliated once more.

He begins to believe that the two of them are in a heroic battle of wits, that Anton is “red–pilling” his viewers into accepting his nihilistic worldview that not a single moment goes by when one creature isn’t being devoured by another.

He becomes increasingly obsessed, following Anton to Paris and thence to an Alpine island. And yet his quarry is always several steps ahead. Anton, like the Center administrators, has been building a file on him while our narrator becomes preoccupied with abstract questions such as Why people are more important than coral or trees. His thoughts are increasingly absurd and delusional.

He ends up in a mental hospital in Glasgow without identification or possessions, unwilling to reveal who he is. Circumstances eventually get him back home in New York where he feels like Odysseus, everything “the same, but different,” as if he had been away twenty years. Even with psychiatric medication he remains delusional, secretive, and resistant to opening up.

Why, his doctor asks, is it so difficult to speak plainly without allusions to books, films, and art? He is being rather melodramatic about essentially marginal ideas, she says. “Accept that you might have conventional horizons. Stop asking for life to be a poem.”

But he ends up believing the world to be an elaborate simulation the way it is in The Matrix. And if everything around him was a simulation, then, logically, so was he, too.