The Red Parts: Autobiography of a Trial 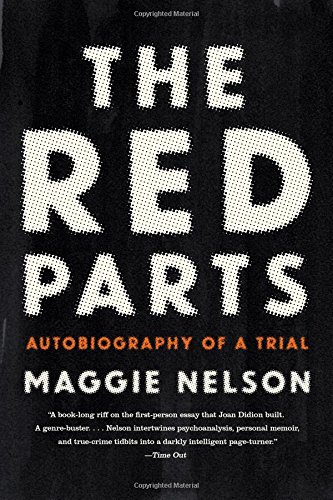 “a fast read about a ghastly situation and its effects on myriad people.”

The Red Parts by Maggie Nelson is a republication of her original work from 2007.

Nelson’s aunt, Jane Mixer, was murdered in 1969, and Nelson is haunted by that event. In spite of the fact that she never knew her aunt, the family lore and various accounts of it prompted her to write Jane to give her aunt the life that was taken away.

Although the case remained unsolved for 35 years, expecting that the murder had been put to rest, the entire incident surfaced again in 2004 when a suspect was found once DNA testing came of age. The man, Gary Leitner, was charged with Jane’s murder and put on trial. This story is the result of the new situation and intended to be an “autobiography” of his trial.

Nelson explains in the preface, “One aim I had while writing was to allow the events of the trial, the events of my childhood, the events of Jane’s murder, and the act of writing to share a single spatial and temporal moment.”

She achieves this goal by writing of the details of a dysfunctional family from all perspectives. While the book gives some insight into the trial, that appears to be more of an underpinning to her family history. Sitting in the courtroom, having discussions with her mother, talking to friends—every moment raises childhood experiences to the surface, and these she discusses in some detail.

At various points throughout the book, Nelson refers to the prosecution’s photo gallery of Jane’s murder scene. Although only using six photos throughout, the description of each photo grabs the reader and throws him or her into the dark recesses of Nelson’s mind.

Nelson’s specifics about her sister’s problems, her mother’s affair, her parents divorce, her own perceived inadequacies regarding taking control of her life, her father’s death, her mother’s two marriages—all accounts throw a cover of the actual trial details with a heavy blanket of pitiful behavior.

Having said that, it is apparent that writing about these family issues while attempting to make sense of the distance between the murder and the trial, provided a cathartic outlet for Nelson’s emotions.

In the chapter The Victim Room, Nelson seems to sum up the finality of a murder trial as the verdict is read. “I try not to look at Leiterman’s family. I know they are devastated. ‘Justice’ may have been done, but at this moment the courtroom is simply a room full of broken people, each racked with his or her particular grief, and the air heavy with them all.”

Her writing style is clear; through her choice of words and phrases molded into understandable metaphors and similes, she presents sharp visions of what she is seeing and feeling, and she shares the rawness of these images with her readers.

Although moving back and forth through her personal issues may be difficult reading, her writing is charged with the emotional pictures that make the reader want to continue moving forward. This is a fast read about a ghastly situation and its effects on myriad people.