The Red House: A Novel 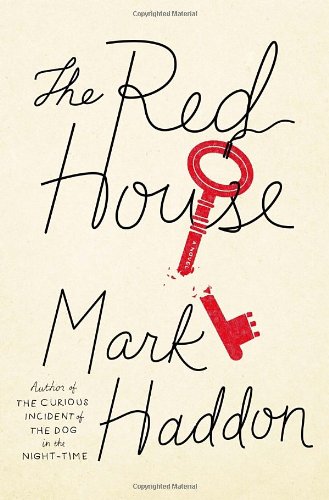 Mark Haddon gave himself a hard act to follow. His bestselling debut novel, The Curious Incident of the Dog in the Night-Time, a mystery written from the point of view of an autistic 15-year-old English boy, was original, creative, cleverly plotted, insightful, and a darn good read.

His newest book, The Red House, is not as stunning or original. How could it be? But it is a good novel in itself with an addictive plot and complex characters (albeit with more normal personality problems).

If The Red House relies on what’s become a well-worn device of darting among points of view, thus moving the story along while revisiting the same scenes through different characters’ eyes, it employs that technique effectively and subtly.

Most of the viewpoints are those of the eight members of an extended and estranged family spending an awkward week together at a vacation home on the English-Welsh border.

This “holiday” was conceived and paid for by Richard, a seemingly successful doctor worried about a pending malpractice suit. For years, while their mother has deteriorated into dementia, he has barely communicated with his elder sister, Angela, an overweight teacher depressed that her marriage and children are slipping away and still mourning Karen, the stillborn, physically deformed daughter to whom she gave birth 18 years earlier. But after meeting up at their mother’s funeral, Richard has decided it’s time for their two families to get to know each other better.

The others in the cast are Louisa, Richard’s new wife, who adores him but has hidden some presumably sleazy facts about her working-class past; Melissa, Louisa’s resentful teenage daughter from her previous marriage; Dominic, Angela’s unemployed-musician husband, who has been having an affair; and Angela and Dominic’s children: Alex, 17, who of course lusts after Melissa; Daisy, 16, who has discomfited her parents by discovering religion; and Benjy, 8, who wants only to act out the video games and science fiction that enthrall him.

As is typical at reunions of all sorts, old animosities are revisited, secrets are revealed, opportunities are missed, wrong words are uttered, unlikely pairings occur while other expected bonding does not. The more these eight people interact, the worse things get.

With so many different familial relationships, this cast mixes and matches through a range of interchanges, and Mark Haddon has a sure ear for all of them.

For instance, the track of Richard’s reactions after he discovers Melissa covertly smoking marijuana is perfect. First, the fumbled confrontation: (all dialogue in the book is rendered in italics) “Smoking is not good for you. He should have planned this better.” Then when Richard orders Melissa to put out the joint, and she responds by seductively offering him a smoke, “It was obvious to both of them that he had already lost both the battle and any means of honorable retreat.”

The interplay among parent-parent-child can be even more fraught, but the author doesn’t flinch. When Daisy confides a painful secret to her mother, Angela is understandably worried about her daughter and grateful for the rare closeness; however, she also enjoys the thrill of feeling “as if she has won a competition to regain her daughter’s affection, beaten Melissa, beaten Dominic.”

Mr. Haddon ably handles some of the biggest risks in the jump-cut writing style of multiple points of view.

He manages to identify who is narrating each segment through just a few carefully placed clues rather than obvious declarations—sometimes even switching voices within a section—while keeping the various plot lines clear. Indeed, the seeds of the many configurations and reconfigurations are well planted—even though too much is too neatly explained at the end.

Yet Mr. Haddon fumbles the multiple-narrator technique in other ways. The characters’ voices are too similar: arch, intellectual, analytical, and prone to list-making.

And there are just too many of them, including Karen (Angela and Dominic’s stillborn daughter), a pretentious omniscient narrator, and even quotes from various books that characters are reading.

Still, The Red House is good enough to prove that Curious Incident wasn’t a fluke. Mark Haddon is a talented novelist who knows how to create sympathetic, fallible, fumbling, well meaning, real characters worth a few hours’ reading time.

Like some of the characters, the reader is sad when the week is over.