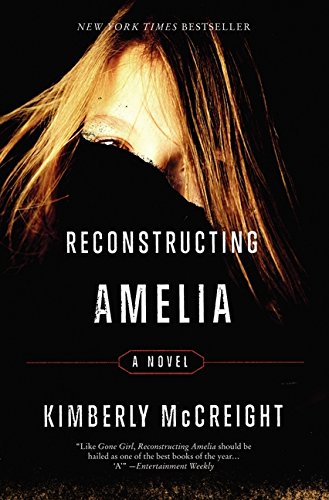 The mix of desire and disdain for popularity and acceptance many women face and the way it shapes them as human beings and informs their actions is the heart of Kimberly McCreight’s Reconstructing Amelia.

High powered attorney Kate is in the midst of a meeting that feels like the most important of her career (though the underlying subtext is that she lives her life with the belief the every case could make or break her career) when she gets a call that will change everything: her similarly high achieving daughter Amelia is being suspended from her tony private school, effective immediately.

Kate knows the call is urgent, but she takes time to cover all of her personal bases at work before leaving for Amelia’s school. Those few stolen moments prove to be crucial when Kate notes with alarm the police cars and ambulance in front of the school; even more devastating is the body she glimpses on the ground before the phalanx of rescue workers and school personnel close in.

To Kate’s horror, Amelia has plunged to her death, distraught over a cheating scandal. Though Kate finds it odd that her intelligent daughter would cheat, she’s ready to accept the judgment of the police . . . until she gets a text denying that Amelia jumped.

Kate is able to convince a sympathetic police officer to reopen her daughter’s case and, in a move that strains credulity, is allowed to actively participate in the investigation of the incident.

What she finds out will shatter her image of both her daughter and herself as a mother, revealing just how little any parent can know about the life of a teenage child.

From that perspective, Reconstructing Amelia is a solid hit. The story is told in alternating perspectives, Kate’s story told in third person and Amelia’s point of view in first person through blog posts, Facebook updates, and other cybermethods. This writing device is notorious for becoming tiresome very quickly, but Ms. McCreight handles it well.

Parents will likely be fascinated by how little Kate really knows about the social hill her daughter climbs every day; this fascination will turn to horror, followed by a sick feeling of numbness.

It’s easy to forget what a pit of man- and woman-eating vipers high school can be filled with.

Ms. McCreight handles her dialogue well, obviously familiar with the territory of a big law firm and the Brooklyn neighborhoods her characters people.

She’s also hit a rather raw national nerve in her evocations of bullying and a nascent same-sex attraction as prime movers in the decisions of a teen on the edge, creating in Amelia a real girl pushed too far. Amelia is neither angel nor devil, and her vulnerability shines through in her first person narrative sections.

Kate isn’t nearly as compelling a character as her daughter. A reader, especially one who is a parent of one of these mysterious teens, might look for genuine grief over the loss of an only child; unfortunately, that emotion is perfunctory, quickly supplanted by a more intellectual drive to “find out the truth.”

Twists and turns are plenty in this novel, and Kate seems to turn from one revelation (some pretty unbelievable) to the next with a somewhat perplexing ease.

The publisher obviously has a lot of faith in this novel, based upon the publicity push, and would like the reader to hearken to last summer’s mystery hit Gone Girl by Gillian Flynn. Though points of comparison exist, particularly in the choice of alternating narratives, Reconstructing Amelia is no Gone Girl.

Ms. McCreight is a more measured writer, her tone more even, and her aim is more at understanding the complexity that was Amelia’s life than on a creating a whodunit-type mystery. That aspect was far more interesting (though less marketable) than the more rote mean girls/rich spoiled kids/cyberbullying supratext.

In that respect, Reconstructing Amelia has far more kinship with Megan Abbott’s Dare Me or Carol Goodwin’s Arcadia Falls. Ms. McCreight’s novel is arguably better than these others on the strength of her writing, but falls into similar soap operatic tropes and easy generalizations about money, privilege, and the price of parental ignorance.

Regardless, Reconstructing Amelia is certainly an entertaining book—if the reader can suspend disbelief as to how closely a parent would be allowed to participate in a murder investigation involving his or her child, and if the reader can believe a parent wouldn’t be too shattered to delve that deeply, that quickly.

All in all, Reconstructing Amelia will likely prove a springtime hit for Ms. McCreight.