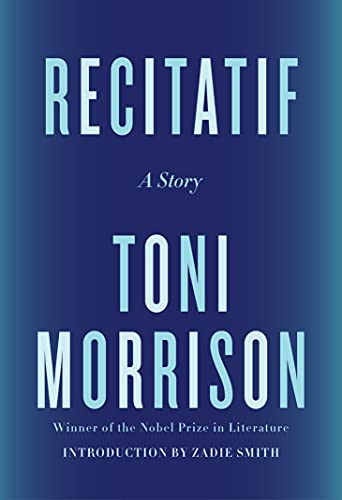 “a fascinating piece of writing from a master storyteller”

Recitatif is a fascinating piece of writing from a master storyteller. It works on the most basic level as the story of two girls “dumped” into an orphanage (one’s mother is always sick; the other’s mother is always dancing). The two room together since they are the only non-orphans at the institution. When they meet later as grown women, we see how very differently their lives have turned out. What do they have in common besides a shared slice of the past? Do they even share that when they remember key events differently?

From the start, we know the girls are different races, but the trick of the book is that we’re never told who is Black, who is white. Any racial identity is built up in the reader’s mind. Morrison did this deliberately, of course. One of the most intentional writers of our time, she called the story “an experiment in the removal of all racial codes from the narrative about two characters of different races for whom racial identity is crucial.”

Twyla is the narrator and describes her first impression of her new roommate, Roberta:

“I liked the way she understood things so fast. So for the moment it didn’t matter that we looked like salt and pepper standing there and that’s what the other kids called us sometimes. We were eight years old and got F’s all the time. Me because I couldn’t remember what I read or what the teacher said. And Roberta because she couldn’t read at all and didn’t even listen to the teacher.”

The girls become friends because nobody else will go near them. Many years later, when Twyla is working at as a waitress, Roberta comes in with a lively group of friends. She’s well-dressed, well off and doesn’t return Twyla’s attempt to reconnect. More years pass and the two women bump into each other in a grocery store. This time Roberta is friendly and quickly invites Twyla to a cup of coffee to catch up:

“Once, twelve years ago, we passed like strangers. A Black girl and a white girl meeting in a Howard Johnson’s on the road and having nothing to say. One in a blue and white triangle waitress hat—the other on her way to see Hendrix. Now we’re behaving like sisters separated for much too long.”

Are they sisters? What connects them and what separates them? Race is the obvious answer, but as women there’s also status and wealth. The socio-economic divide feels just as wide as the racial one. Morrison adeptly makes us question all of our assumptions. Does the story mean something different if Twyla is the white girl? What if she’s the Black girl?

Zadie Smith writes the introduction in a beautiful example of careful reading. The pleasure of reading Morrison’s story is amplified by Smith’s analysis, so readers shouldn’t skip it. Like us, Smith doesn’t know for sure the race of either girl. And that, she rightly insists, is entirely the point: “Oh, I urgently wanted to have it straightened out. Wanted to sympathize warmly in one sure place, turn cold in the other. To feel for the somebody and dismiss the nobody. But this is precisely what Morrison deliberately and methodically will not allow me to do.”

Both girls, Morrison proclaims, are human beings, each with her own difficulties and rewards, and that’s how we should relate to them.