The Rebellion of Miss Lucy Ann Lobdell: A Novel 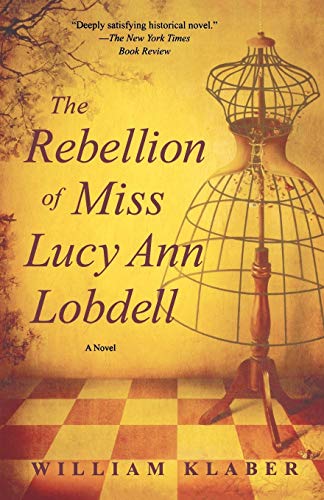 “The book raises questions that are left unanswered. So the reader is left to wonder.”

Memoirs are all the rage. This memoir is fiction. That places it in a different position from the usual memoir.

The author, William Klaber, discovered Lucy Ann Lobdell when he moved to Basket Creek—but only after living there for 20 years. Through him we come to know Lucy Ann on a level of his own creation. This is one of the book’s draws and it is also one of its drawbacks.

The story begins in the 1855 when Lucy Ann realized that men had an easier life—more freedom, more adventure, more of everything.

She had married against her parents’ wishes. She married a man who presented one face during courtship and quite another after the vows were recited. He was a drunk and abusive. It was neither the life she expected nor the one she wanted. She returned to her father’s house and her husband sold the cow and left town seven months before her daughter was born.

The memoir follows Lucy Ann—known as Joseph Israel Lobdell—through her transition from young woman with a mind of her own, through a short marriage and the birth of a daughter, past a decision to leave everything she knew and embark on an adventure as a young man with a desire to find work, into realizing that loving a woman was her natural way and ending as an old woman, forgotten and dying in a state insane asylum.

There are indications that Lucy Ann promised to write her memoir but no record of such a document exists. Creating one from letters, newspaper clippings and public records, allowed Klaber to introduce us to a woman whose life is remarkable and frustrating and sad.

“But my heart knew what my head could only suppose--that I had to leave or surely die . . . With my bag in one hand and a rail of cold iron in the other, I looked back as Callicoon and everything I knew slid off into the distance.”

Sadness permeates this memoir. Every time Joseph finds a home, his secret is discovered and he is forced to move on. He keeps moving west until he buys a homestead in Minnesota. He is safe until his secret is again discovered.

Joseph: “In low spirits I went to my room. I just wanted to settle with the law, go back to my farm and live there as a woman, if I could—if they would let me. But, I wouldn’t be just any kind of woman. Not now. I would be one with the every freedom of a man, starting with what I would wear.”

The Book of Deuteronomy prohibits dressing in the clothes of the opposite sex. Laws banning cross-dressing began to pass in the early 19th century making illegal for a person to dress in clothes associated with the opposite sex. From 1848 to 1900, 34 cities in 21 states passed laws prohibiting cross-dressing. Eleven more cities passed these laws before the start of World War I.

What makes Lucy Ann Lobdell so compelling is her willingness to risk everything, including her freedom, to live life the way she wanted. That may not seem very bold in 2013, but in the 1850s it was a radical and dangerous notion.

The book takes Lucy Ann from a young woman in the early 1800s through her death in the last part of the 19th century. I wish the author had used dates. At times it is difficult to follow the story because you cannot tell the year or the place. More specifics would have been helpful.

The book’s lack of definition is its chief drawback. The underlying story is enticing. But at times I thought the narrative was forced.

The most difficult aspect of Lucy Ann’s story deals with her daughter, Helen. Lucy Ann initially says she is leaving to seek “a place for myself and for Helen, but in leaving her and starting a new life, I had invented a me that was, in many ways, not her mother.”

Later, in Delhi, Lucy Ann says, “I had told myself when I had left home man years ago that I was going to find work and a place for myself and my daughter. I failed. And somewhere along the way, I had begun to look for something else—freedom for myself.”

When it came to Helen, Lucy Ann appears to be less concerned about her daughter, in spite of all her protestations to the contrary, and more concerned with her own quest. Lucy Ann’s continual claims about seeking a reunification with the daughter she abandoned do not ring true. She may have believed them but her actions speak otherwise.

As with too many books written today, the author spends considerable time on the first two-thirds of a book. The end of the story, however, left me feeling cheated.

I question the author’s decision to leave out the last 32 years of Lucy Ann Lobdell’s life. How her life ended is important. The author provided tidbits of information that left me wondering what I was missing.

Lucy Ann Lobdell did not write this memoir. William Klaber wrote it for her. The book raises questions that are left unanswered. So the reader is left to wonder.

Is this the story of a transgender man? Did Lucy Ann identify as male? Possibly, but it seems more that she wanted the freedom that men enjoyed. Was she a lesbian? Probably.

At least based on her own words, “If anyone should tell you that a woman cannot find satisfaction with another woman, I can be your witness to say it isn’t so. We both found our pleasure that afternoon—several times. And in being outside and not under a ceiling or blanket, our love seemed almost like a sacrament. And if God had wanted to show his disapproval, He could have sent the rain or a stroke of lightning, but instead he sent dragonflies and sparrows.”

Lucy Ann Lobdell, aka Joseph Israel Lobdell, lived during the time of Oscar Wilde and Boston marriages. While the book does not specifically address issues of sexual orientation and gender identity, the tale allows the reader to speculate.

The exact words may have been unfamiliar to Lucy Ann but “the love that dare not speak its name” may have been familiar. If nothing else, Lucy Ann was well aware that her actions—dressing and living as a man, having sex with a woman, were unacceptable.

We are made privy to the life of a remarkable woman who lived a life worthy of being remembered. But this fictionalized memoir lacks a satisfying conclusion. Because this is a fictional version of Lucy Ann Lobdell’s memoir, we can imagine what she and her life were like. We can consider the hardships she endured to achieve a life that allowed her to be herself even if that meant permanent estrangement from her daughter. Anyone reading the book will appreciate those efforts.

Like many women then and since, she tried to break free from society’s regimen and expectations. And at times she succeeded. In the end, however, the “Female Hunter of Long Eddy” died alone in an insane asylum.

Even considering that, I think Lucy Ann Lobdell would consider her life a success and one worthy of being remembered.