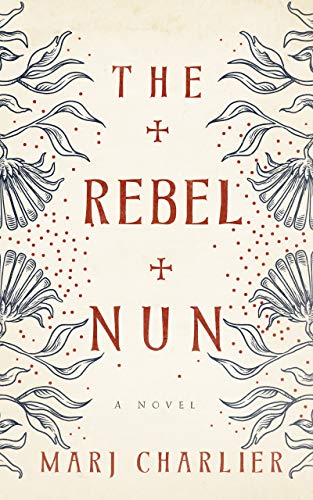 “Gaps of time notwithstanding, Charlier puts forth an interesting take on an historical event.”

Marj Charlier’s recent book, The Rebel Nun, relates the story of Clotild, a nun in the late sixth to early seventh century who led a rebellion of her sisters against the church.

Based on a true story, The Rebel Nun  brings the main historical characters to life through this one activity.

The story starts with a prologue that introduces the reader to an older Clotild, living a quiet life well after the revolt. She writes about the events that led up to and followed the revolt, as a means of countering the official version written by Bishop Gregory of Tours.

In her version we meet a young woman who is not totally the religious person she is expected to be. In fact, although she follows the tenets of the Catholic religion, she quietly covets the pagan beliefs she was raised with.

At the beginning, when the vile Bishop Maroveus arrives at the church to announce the name of the newly appointed Abbess of the church, his announcement is met with bitter disappointment when Clotild, expecting to be named, learns that the honor has been given to Sister Lebover.

Here Charlier does a good job of showing Clotild’s disappointment at not being named and at the same time displaying her ambition and pride—two flaws that certainly did not belong in a convent.

Charlier also takes advantage early in the story of developing her antagonists in the characters of Maroveus and Lebover. In particular, she gives Maroveus depth and dimension; and yet while Lebover’s flaws are made apparent, the character never quite comes through as anything more than one dimensional.

As Lebover’s power grows, her sins become more apparent. She gathers items meant to be used in trade for essential materials and covets them as her own property. Soon the cupboard is bare of the essentials and there is nothing left to trade for goods. At the same time, the church, led by its male contingent, declared “war against women in the church, a disagreement over the proper location for relics, a conflict over the role of bishops in female monasteries.” Women had almost no role to play in everyday life. They could marry abusive men; be prostitutes; or join the church—in all instances they had no authority over their own lives.

As the male-led church placed more restrictions on the “unclean” females, Clotild’s anger grew. Her life had no meaning, and she questioned the beliefs put forth by the church, finding herself pulled further and further back to her mother’s pagan origins.

Her discontent leads to rebellion, and soon she gathers numerous nuns, and they begin their rebellion by leaving the convent—an excommunicable act—and going first to find Bishop Gregory to plead their case, then she proceeds on to her uncle, one of the area kings, to further make her case.

In both instances she is rejected.

The timeline over which this rebellion takes place is a little less than a full year. Upon reaching her uncle’s residence, she remains for three months. During those three months, she eats a lot and fills out her bodily form. But nothing more happens. She returns to Gregory’s residence where she learns that half of the cortege of nuns have left either for marriage or prostitution.

Charlier presents an interesting take on the historic event, but it is not until the women are returned to the church with a plan to further muddy the waters with their demands, that the story picks up speed.

There are a number of periods of time where important things must have happened, but the reader only knows that two weeks, or three months, or however-many hours and days have passed by while this rebellion is taking place with no detail, nothing important happening.

The story gets interesting when the women are returned to the convent and the revolt takes on a violent aspect. This is followed by Clotild’s trial with the expected results. The account of the trial feels somewhat watered down.

One of the more interesting aspects of the story is the entrance of a ruffian named Alboin. He is an Aryan Christian, a sect much detested by the Catholic side of Christianity. Charlier develops his character with depth; she builds an attraction between Clotild and Alboin that stirs feelings the nun questions within herself. Alboin plays a strong part through the final stages of the story as a support for Clotild’s plight. And yet again, there are long lapses of time between their encounters when one would expect him to be more front and center in his assistance to her or at the very least, remain in contact with her. He seems to appear at unexpected times.

Charlier ends her story with an epilogue that brings the reader back to Clotild as an older, more mature woman. She clears up the status of the other characters and ties up some loose ends.

Gaps of time notwithstanding, Charlier puts forth an interesting take on an historical event. Her research is well conducted, and in the first person, she puts the reader into Clotild’s thoughts, concerns, emotions, and confusions.