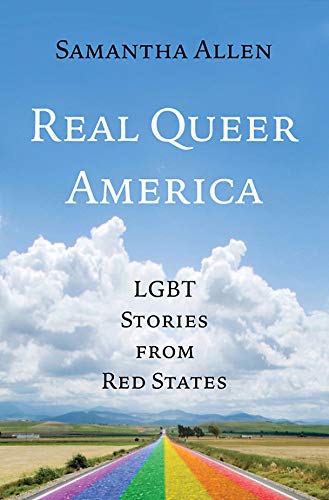 “Real Queer America is a fun read in which Allen’s copious research informs, but never overwhelms, the many stories of disparate, fascinating LGBT lives.”

The dominant LGBT narrative of the 20th century, as Samantha Allen notes in Real Queer America, was the migration of gays from small towns to big cities in order to achieve self-actualization. These narratives were often dominated by the white, gay male experience, and paid too little attention to women, people of color, and the transgender community.

In Real Queer America, Samantha Allen attempts to bring the story into the 21st century, and to locate the queer experience in the Red State heartlands. Traveling in a rented car, and accompanied by Billy, whom she describes as the transgender brother she never had, Allen’s picaresque journey allows her to meet and document LGBT people living in such disparate locations as Provo, Utah, Bloomington, Indiana, McAllen, Texas, and Johnson City, Tennessee.

In conception and execution, Real Queer America shares much in common with Dan Savage’s, Skipping Through Gomorrah, in which Savage scours the nation in search of people committing the seven deadly sins.  Savage usually focuses on one or two representative “sinners” in each stage of his journey, telling their stories in some degree of detail.

Allen’s strategy is different in that she goes for breadth rather than depth. As a result, Allen’s book is a Whitmanesque catalogue of America’s queer population: male and female; cis and trans; young and old; gay, bi, lesbian, pan; white, black, Asian, and Hispanic.

Allen tells their stories—and hers—in a casual, intimate style, effortlessly comparing and contrasting their Red State experiences with the ways LGBT issues are playing out at the state and national levels. In this, her book is admirable, because it allows her subjects to escape both the stereotypes and the condescension that normally surface when east or west coast journalists pay occasional notice to the LGBT population in “flyover country.”

But there is a problem with Allen’s encyclopedic approach; just as some of the people in Walt Whitman’s catalogs get lost among the sheer number of figures competing for the reader’s attention, so do many of the people Allen speaks to on her journey.

Certain people stand out, such as Michael Shutt, the Director of the Office of LGBT Life at Emory University, or Jess Herbst, who transitioned from male to female while serving as mayor in New Hope Texas. In other parts of the book, when Allen leaves a city or a state, readers won’t be precisely sure to whom they have been introduced, except that there were a whole lot of them, and they were all queer.

Of course, that is one of the major points Allen’s book is designed to make. Despite the 20th century migrations to the big city, the heartlands always had their share of LGBT people; not everyone could move to New York or San Francisco, or even wanted to.  Still, each generation is more likely to come out than those in the past, and, as Allen notes, notes, social, demographic, and economic shifts make it less likely that LGBT people will move to urban meccas in the same numbers as their post-WWII forbears. As ever more queers find ways to live fulfilling, authentic lives in Jackson, Mississippi, or Casey, Illinois, there will be less and less of a motive to leave.

Real Queer America is a fun read in which Allen’s copious research informs, but never overwhelms, the many stories of disparate, fascinating LGBT lives. In The Wizard of Oz, Dorothy traveled to the Emerald City, but ultimately learned that Kansas had been her true home all along. If Samantha Allen is correct, increasing numbers of LGBT people are coming to the same realization.