Reader, I Buried Them & Other Stories 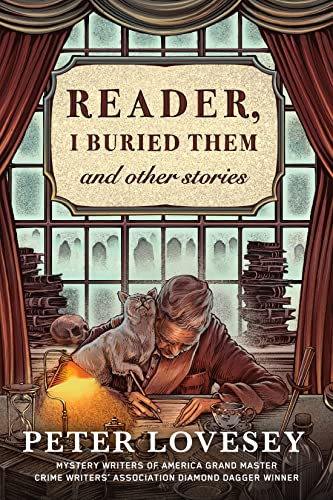 “This is delightful old-school mystery fiction, filled with humor, suspense, and a knack for twisty surprises that Lovesey has made all his own.”

How many readers made it through the pandemic with the help of Peter Lovesey? We will never know, but there is a good chance the work of this British mystery veteran has entertained many during the late unpleasantness.

Lovesey is a fine writer whose fiction is consistently brisk and entertaining—the perfect escape. His output includes more than 40 novels, and the most notable feature the irascible Peter Diamond, a police detective based in contemporary Bath. He is a Grand Master of the Mystery Writers of America and has won many other literary honors here and abroad.

Reader, I Buried Them collects 18 of the author’s short stories published over the past 50 years in Ellery Queen’s Mystery Magazine, Winter’s Crimes, and elsewhere. One of them—“The Bathroom,” his first in print, involving a house with a sinister past—won accolades for neophyte Lovesey from crime novelist Ruth Rendell.

Readers familiar only with Lovesey’s police-procedural novels will be delighted to see how widely the author ranges in these stories. Crime remains his beat, but the “unlikely protagonists,” as he calls them in a foreword, are people from disparate walks of life who are “unexpectedly visited by crime.”

They range from a romance novelist to a beekeeper and a dressmaker. The reader can only imagine Lovesey’s fun in researching their diverse ways of life.

The title story brings us into a London monastery, where Brother Jeffrey, the narrator, not only worships the Lord but also oversees the “spectacular” wildflower meadow, where he buries brothers who have “crossed the River Jordan” in graves with simple wooden crosses.

It also occasions some lilting observations from the gravedigger:

“Summer was the season of carnival, poppies in profusion, tufted vetch, ox-eye daisies, field scabious and foxgloves along the borders. Even as we approached September, the white campion, teasel, borage and wild carrot were still dancing for me.”

In “Angela’s Alterations,” a woman with a knack for “turning people’s lives around” works wonders on antisocial young Rick, who has been drinking, shoplifting, and night clubbing. He improves, but Angela soon disappears abruptly.

Some stories have a strong historical angle, such as “The Deadliest Tale of All,” in which author Edgar Allan Poe, at 40, tells the journalist who plans to write his advance obituary for the New York Daily Tribune: “I don’t want this! How can you compose my death notice when I am still of this earth? It’s ghoulish.”

In “And the Band Played on,” that haunting tune about dancing with a strawberry blonde, a young boy learns the surprising truth about his grandpa’s secret past.

“Formidophobia,” which means fear of scarecrows, portrays a man who has had this peculiar dread since the age of eight. But he has never realized until now what happened long ago to cause his anxiety.

This is delightful old-school mystery fiction, filled with humor, suspense, and a knack for twisty surprises that Lovesey has made all his own.