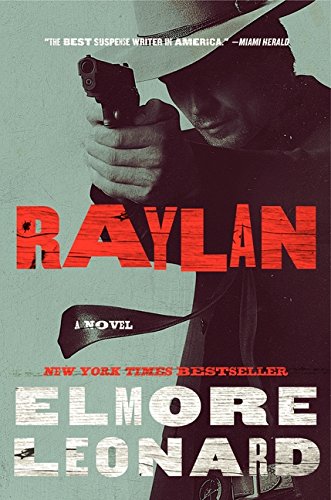 “Along with his renowned storytelling ability, Mr. Leonard supplies crisp bullet-speed prose, sardonic humor, and villains and heroes aplenty in Raylan: A Novel. The Harlan County coalmines may have closed, but they have uncovered a hidden gem. Just make sure it’s part of your treasured collection.”

At the start of his prolific writing career as an accomplished novelist, Elmore Leonard cut his teeth penning Westerns. Some of those were made into successful movies. Hombre, 3:10 to Yuma, and The Tall T, being his most celebrated works.

In Raylan: A Novel, he returns to his roots, modernizing the genre, not with a cold-staring Clint Eastwood Hang ’em High but more of a Gary Cooper enforcing the law with politeness and humor. U.S. Marshal Raylan Givens, the hero of Raylan, initially appeared in the novels Pronto and Riding the Rap. Mr. Leonard later penned the short story “Fire in the Hole” that became the basis for the hit television series Justified.

Characters come and go and are mostly inconsequential. But not Raylan. In April 2011, Mr. Leonard revealed in an interview that the success of Justified had inspired him to begin work on a new novel about the character. And thus Raylan: A Novel was born, making it Mister Leonard’s 45th book.

With the closing of the Harlan County, Kentucky, coalmines, marijuana has become the biggest cash crop in the state. A hundred pounds of it can gross $300,000, but that’s chump change compared to the quarter million a human body can get you—especially when it’s sold off piece by piece. So when Dickie and Coover Crowe, dope-dealing brothers known for sampling their own supply, decide to branch out into the body business, it’s up to no-nonsense U.S. Marshal Raylan Givens to stop them.

But Raylan isn’t your average marshal; he’s the laconic, Stetson-wearing, fast-drawing lawman who juggles dozens of cases at a time and always shoots to kill. Raylan returns to his home ground, Harlan County, Kentucky, no longer the country boy he once was, but a dedicated lawman whose belief in justice is always his driving force and creed.

The book begins bloodily when Raylan comes to bust dope dealer Angel Arenas at his motel, the Cumberland Inn. The itchy-fingered state troopers are impressed when Raylan struts into the convict’s hotel room without drawing his gun. Raylan soon finds that Angel’s already been the victim of another crime, and gets a little bit more than he bargained for as he enters the room and discovers Angel in a bloody bathtub not of his own making:

“Angel Arenas’s head rested against the curved end of the bathtub, his hair floating in water that came past his chin, his eyes closed, his body stretched out naked in a tub filled close to the brim with bits of ice in water turning pink.” A few lines down we discover the ghastly reason for why the bathtub is turning pink: “He had something done to him,’ Raylan said. ‘He’s got like staples closing up what looks like wounds. Or was he operated on?”

But by the time Raylan finds out who’s making the cuts, little does he know that soon he’ll be on the receiving end of a knife, lying naked in a bathtub, with the ice-cool transplant nurse about to go for his kidneys.

The bad guys are mostly bad gals this time around. Leading the pack is Layla, the nurse who collects kidneys and sells them for ten grand a piece. She makes Nurse Ratched from One Flew Over the Cuckoo’s Nest, look like a benign Florence Nightingale.

Then there’s Carol Conlan, a hard-charging coalmining executive not above ordering a cohort to shoot point-blank a man who’s standing in her way, a woman even Tony Soprano would find immoral. And to complete the trilogy of dodgy dames is Jackie Nevada, a beautiful, sometime college student who can outplay anyone at the poker table and who suddenly finds herself being tracked by handsome Givens.

Will this deadly trio be too much for our intrepid lawman, or will he be able to dig deep enough to best the odds?

Along with his renowned storytelling ability, Mr. Leonard supplies crisp bullet-speed prose, sardonic humor, and villains and heroes aplenty in Raylan: A Novel. The Harlan County coalmines may have closed, but they have uncovered a hidden gem. Just make sure it’s part of your treasured collection.