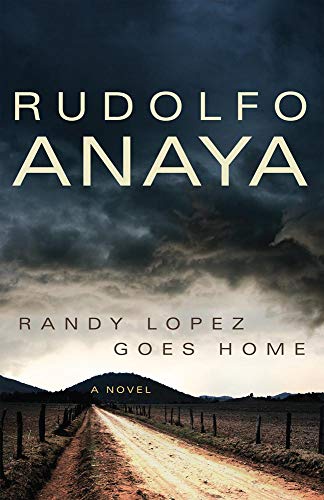 Nestled in the hills of northern New Mexico is Agua Bendita—a sleepy village where the laws of physics snooze in the afternoon sun and memories are the only road signs. Randy Lopez was born in Agua Bendita many years ago. Here, he was rooted by Mestizo culture and love for the beautiful Sofia. Then he left the village to live among the Anglos. He made some money and wrote a book, but was sad and disoriented. Now he is returning home.

The plot to Rudolfo Anaya’s Randy Lopez Goes Home suggests a retelling of The Wizard of Oz. Randy, like Dorothy, has a plain but satisfying life with people who love him. But he is young and yearns to see a bigger, wealthier world. Then Randy realizes “there’s no place like home.” He takes a long journey back to Agua Bendita, during which he runs into fantastic obstacles and deals with an assortment of characters. But while The Wizard of Oz was manic and simplistic fantasy; Randy Lopez Goes Home is muted and contemplative literary fiction.

Each chapter of Randy Lopez Goes Home is built around a new character that Randy meets or a new place in Agua Bendita that Randy must pass to reach Sofia. Some of the characters Randy meets are ironic—i.e., a librarian of a library that no longer exists. Other characters are not of this world—i.e., a curious adaptation of the Devil, in the form of a sulfur-scented old man bemused by his evil reputation. Scenes alternate between mundane and surreal: a sleepy post office hosts one scene, a raging river with supernaturally large waves is the setting for another.

Given these contrasts, it would be easy for Randy Lopez Goes Home to become a mess of ill-fitting parts. But Mr. Anaya holds the book together by linking them all to a single theme: Randy’s quest to return to Sophia, his long-lost love. The narrative is also grounded in recurring subthemes—the meaning of being Hispanic in an Anglo country, the power of myth (whether Ancient Greek, American Indian, or Judeo-Christian), and the importance of personal identity. The book is dotted with Randy’s self-interrogations of self and culture. The excerpt below is typical:

“Gringos, like any other group, are just different. That’s all. Living with them, I became like them. And as I became more like them, I felt I had lost something of the old me. So how did living in another culture affect me? Why do I feel I lost part of who I am? Who was I? Who am I now?”

For readers not familiar with Mr. Anaya (most famous for the bittersweet Bless Me, Ultima), Randy Lopez Goes Home defies easy comparison. Perhaps Thomas King’s Green Grass, Running Water or Isabel Allende’s The House of Spirits come closest, as all these books share a veneer of realism overlaying a core of fable. But Mr. Anaya’s tone is heavier and his inferences about modernity less optimistic. Mr. Anaya wants readers to contemplate what is lost in an Anglo world where “competition” is a virtue.

While contemplation is a healthy byproduct of good literature, readers still expect fine storytelling in novels. Randy Lopez Goes Home lacks much of what makes a novel a good read: dramatic tension between recurring characters, sustained action, and an identifiable antagonist. Contemporary authors have thankfully moved away from simplistic hero vs. villain plots that end with a pyrotechnic bang, but most modern readers still expect more storytelling than Mr. Anaya offers in Randy Lopez Goes Home. The uneven flow and inner dialogue make the book a very slow read for a short book (157 pages).

Randy Lopez Goes Home is an original, thoughtful book, and a unique exploration of the loss of pre-modern Mestizo innocence in post-innocent Anglo America. But it wasn’t much fun.