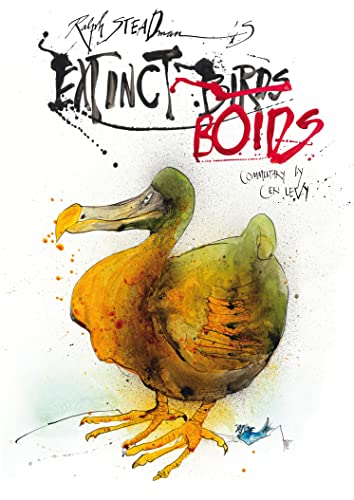 Among the many theories about the origins of creativity is that it may be triggered by the confluence of receptivity to adventure/opportunity, initiative to implement a project, circumstance and context, and serendipity. The backstory of how the charming, quixotic, fascinating Extinct Boids came to be created is a manifestation of this theory.

Filmmaker Ceri Levy’s invitation to artist Ralph Steadman to contribute a piece of art depicting an extinct bird for inclusion in an exhibition—motivated by the desire to call attention to the risks of extinction of so many of the world’s bird species—prompted the latter to produce not one but a 100 bird pictures.

Mr. Steadman’s enthusiastic response morphed into a book about an eclectic collection of some real, some make-believe and even bizarre birds.

Early in the process when Mr. Steadman had already produced several pictures for Ceri’s show, the latter wrote in his diary, “I have been thinking about the word that has appeared with these first images. BOIDS. Ralph’s use of the word intrigues me. I like the sound of it. It seems somehow apt. These are not scientific, textbook illustrations. These are Ralph’s take on the subject. He has stamped his persona on them, and given them their own unique identities.”

Revealing how he was lost in his art, going well beyond the expected response to the invitation to contribute a single extinct bird picture, Mr. Steadman emails Ceri, “I don’t know why I was doing it, but I have done four birds today. Extinct too!”

Extinct Boids comprises pictures of the bird-art-making process, diary exerts, a running email exchange chronicling the evolving work, wonderful visual images of the birds and boids, and commentary on each of the images in a lavish coffee table scale volume, whose production values are superior.

This diversity of media, perspective, style, format, and tone adds much to the pleasure found in this magnificent volume.

Mr. Steadman is exuberant in his artistry, hilariously inventive in his labeling, and entertaining in his commentary on the boids. Poking fun at birders, some of whom take themselves and their obsession with exaggerated seriousness, Mr. Steadman conjures such inventive names for his imaginary boids as Blue Slut, Needless Smut, Pink Worthless Scrawl, and Long Legged Shortwing.

Of the Random Blotted Slumley, Mr. Steadman writes, “The Random Blotted Slumley is a reluctant friend of the Pink Rotten Scrawl, purely because they are so grumpy that no one else will hang out with either of them. Their days always start with a bicker together to get the blood flowing through their wings, which, let’s face it, have seen better days.”

Presenting the art of this polymath creative—whose work ranges from collaborating with the late gonzo journalist Hunter Thompson, illustrating such classics as Alice in Wonderland, and writing and illustrating his own books on such topics as Sigmund Freud—in a large scale book exemplifies the merit of print in an era in which so much knowledge work is conveyed digitally.

One of the aspects to be treasured of this book is its window into the creative process: the initiatives of producer and artist, their unfolding collaboration, their reflections on the process.

Indeed, many who appreciate art executed in a less than serious style, nonetheless modeling excellence, may find Extinct Boids that rare book one enjoys drawing out the experience to one drop(ping) a day.