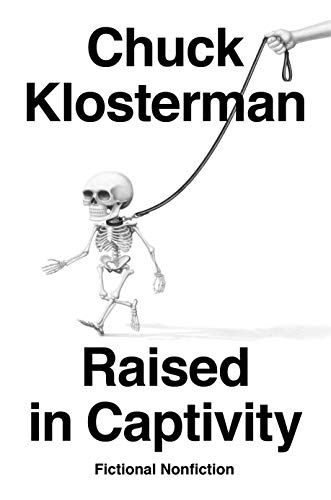 In Chuck Klosterman’s “Tell Don’t Show,” furious ad executives shriek out what might be the premise of Raised in Captivity as a whole: “the consumer will extract from the story we construct. But we can’t just tell them this directly. We need to show this nonfictional possibility in the same fictional way we show everything else.  Except this time, the fiction needs to be true.”

It’s a circular, almost profound declaration framing a banal revelation: that this really is the best dog food ever. The revelation can’t be told, because it won’t be believed, so it has to be shown, even if fiction is the most absurd way to convey a direct idea.

The advertisement is the book: Klosterman has assembled a series of “weird thoughts” and presents each one through a short story or microfiction. The technique could be a revelation, except that this “fictional nonfiction” approach is, of course, the foundation of contemporary science fiction. And while Klosterman resists science fiction as a label, his concepts wouldn’t be out of place in many science fiction anthologies.

The problem with resisting “science fiction” as a label is how clearly it demonstrates a lack of awareness of science fiction as a genre. The intelligence, insight, and complexity of modern scifi is nothing to be sneered at. Klosterman does occasionally gesture at scifi, but it’s through a simplified pop culture lens. In “Pain is a Concept by Which We Measure God,” two parents-to-be discuss a possible procedure in which the pain of labor is transferred from wife to husband.  The husband remarks, “You know, I saw this British TV show on Netflix,” an overt gesture to the series Black Mirror.

Critics remarked that Black Mirror (particularly in its Netflix incarnation) might be subtitled, “What if the present, but more so?” Raised in Captivity has a similar energy. Contemporary discomforts, from political intersections with pop music to pyramid schemes, are re-framed as urgent philosophical problems, played out in slightly surrealist vignettes.

Unlike Black Mirror, the “nonfictions” in Raised in Captivity seldom play out complete stories. Instead, they raise possibilities and end on unresolved notes. The characters experience and observe, but don’t grow or change. Klosterman assumes that observation is sufficient, and that his insights are satisfying in and of themselves which, unfortunately, they aren’t, quite.

Klosterman’s career encompasses both fiction and nonfiction, and quite a lot of sports writing. It must be said that Klosterman is at his most interesting and engaging when writing about sports. “Execute Again,” about a high school football team with only one play, and that one infinitely complex, is subtle and hilarious. The nameless story “[           ],” which imagines a short-lived, epic basketball dynasty coming out of M.I.T., raises genuinely charming and irreverent possibilities, even as it mocks the fiction of the student athlete that props up the NCAA.

Where Klosterman isn’t writing about sports, though, he’s out of his depth. His cultural knowledge isn’t sufficiently wide-ranging, nor is his grasp of genre sufficiently complex, to bring anything new to the table. The stories that might be subtly parodic in more adept hands falter in his. “Tell Don’t Show” opens with a description of existential ennui that slides into adolescent absurdity:

“You pass an old man dressed as a clown, talking to a young biracial woman who looks appalled. You pass a soldier in military fatigues looking at pornography on his cell phone. You pass an aging Gen Xer carrying a copy of the Good News Bible. You notice all of these individuals. They are metaphors for nothing. You feel a few random raindrops on your face, despite the sun in the sky. It’s raining while the sun is shining. That happens sometimes. It’s a meteorological phenomenon unrelated to your worldview, which is that humans are conditioned to forget the most important things they experience, in the same way that dreams dissolve from your memory within the same moment you try to explain them to other people.”

Raised in Captivity is a book for people who don’t read much. Readers without much context are likely to be drawn to its observations, which are fairly vivid, even if they’re not original or complex. In that sense, it’s a book that would be damaged by satire or even deep parody. It meets its target audience where it is: in Urban Outfitters, startled by the oddness of the present and beginning to consider what that might mean.