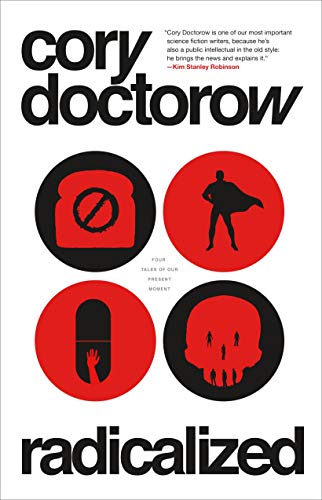 “Doctorow would have been better served to render his ideas as essays, so that he could give them the complexity they deserve, and release his barely realized characters from their political pantomime.”

Cory Doctorow is well-established in the futurist tech scene. His engagement with pop culture has rendered him a kind of icon for “plugged in” web users with more curiosity than deep technical knowledge. He’s likewise known as an unabashedly Marxist-progressivist political thinker, relatively unusual in the tech scene, which is generally deeply capitalist in its philosophical underpinnings.

So far, so good, and Doctorow seems like a natural author to lead a re-thinking of tech culture’s tendencies, but fiction seldom works when it’s treated as polemic, and Radicalized is definitely a polemic. Each of the four novellas in the book takes on a techno-cultural problem: the corporatization of private life, anti-black police violence, the inhumanity of health insurance companies, and the tendency of wealthy tech-bros to consider themselves the fittest in a social Darwinist sense. The characters take second place to the issues, leaving each story as a quasi-Brechtian performance of cultural anxiety.

“Unauthorized Bread” is the strongest of the four stories. Salima, a refugee, becomes frustrated with her kitchen appliances, which will work only with “authorized” products: dishes, bread, soaps, and more. When the original companies go bankrupt, Salima and the other low-income residents of her caste-divided apartment complex begin hacking the devices to work for them, instead of for investment capitalists and the building’s owners.

The story’s heart lies not in the techno-issue or the people’s uprising, but in the community life of a building divided into “rich” and “poor” housing. The “poor door” residents find solidarity in the absence of elevators that will come to their call. Yet they want to remain: for them their apartments are wildly better than the shelters and refugee camps that came before. And the children of the building are engaging characters: independent, curious, and fundamentally outraged in a way their elders are too exhausted to sustain. They forget to pause and look at the reader, to remind us of the artificiality of their scenario, and carry the story struggling to its nearly satisfying conclusion.

“Model Minority” imagines a barely-disguised Superman who has just realized the injustice of police brutality against black Americans. This is a potentially wonderful scenario. Superhero stories abound in popular media, and few if any seriously critique the ways that superheroes reinforce American power structures. Batman is a corporate billionaire who assaults petty criminals. S.H.I.E.L.D. defends the state, even when the state fails to deserve it. The great threats to American civil life are framed as supervillains from space, and, secondarily, petty criminals.

There’s a real sweetness in The American Eagle, the Superman-esque protagonist. He sees injustice, and he seeks to remedy it: he disrupts the assault and pursues the victim to the hospital, where he intercedes again: “I wanted to check in with him, let him know he’s got legal options.” The legal options, of course, are ultimately fruitless and frustrating, for the man assaulted and the Eagle alike. But the story’s focus shifts to the Eagle’s frustration with the failure of the system. He desperately wants it to work, with the faith of a man who has invested centuries in upholding the law.

Two threads separate here. One is fairly effective: an interrogation as to why the Eagle has failed to address racist injustice until now. As a metaphor for white outrage at anti-black racism in America, it’s profoundly effective. No justification is really possible, even for those who most want to be seen as good, and black people are left to help the newly “woke” hero catch up.

The second thread, in which the victim of violence stands up to the police and achieves real change, is less effective. The story’s critique of white privilege is a thin one, without depth and complexity, and it hurls a frustrating veil over a potentially useful story.

Radicalized is tangled in that veil. The stories’ politics are overt but not complex, and any reader with a reasonable background in cultural discourse is likely to find them laughably limited in scope. The stories themselves are simple, and the characters thinly fleshed: no relief there. When we tear ourselves free, we find that we’ve found nothing substantial. Doctorow would have been better served to render his ideas as essays, so that he could give them the complexity they deserve, and release his barely realized characters from their political pantomime.