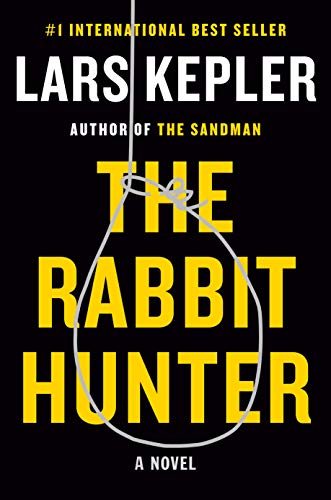 The Swedish Foreign Minister has been assassinated in his own home, but the killer deliberately left a witness, a prostitute who was visiting the victim at the time. The information she provides, however, is puzzling and contradictory.

When Saga Bauer of the Security Police is assigned to the case, she quickly realizes that the murder took 19 minutes to complete. Why did the killer draw it out so long? Why did the victim have to suffer for that exact amount of time?

When it’s learned there will be more victims, possibly including the prime minister himself, Joona Linna is approached to become involved in the investigation. A former detective with the National Operations Unit, Joona is currently serving time in Kumla Prison for offences committed in the previous novel in this series, Stalker. Promised a pardon if he can find the killer before the prime minister meets the same fate as his foreign minister, Joona is provisionally released in order to participate in the case.

Is the so-called Rabbit Hunter a terrorist threatening key government figures? As subsequent victims are found, however, it begins to seem more like the work of someone on a personal mission of vengeance.

What’s the meaning of the 19-minute interval between the initial attack and the final coup de grace? Can Saga and Joona sift through confusing and seemingly random clues to uncover the pattern behind the killer’s actions, his motive, and ultimately his identity, before it’s too late?

While Joona remains one of the best detectives in current Scandinavian noir, once again he has far too small a role in a novel with his name on the front cover.

Moreover, Saga Bauer underperforms rather drastically as his co-protagonist. Given the potential she displayed in The Sandman, two novels ago, expectations remain high. However, her behavior is off, and some of her decisions, such as flying to Chicago (yes, the one in the USA) to interview a witness and to attempt to break into a secure facility, leave us scratching our heads.

In fact, most of the characters in this novel are inexplicably dreadful. Readers are made to suffer through the likes of Janus Mickelsen, Saga’s Security Police cohort, who’s one of the most randomly weird police characters yet.

Then there’s celebrity chef Rex Müller and his son, potential victims of the Rabbit Hunter. (Or is Rex the bad guy after all?) Another tediously dysfunctional father-son combination half-baked by the Ahndorils to mess with our stereotypes.

And we mustn’t forget police psychologist Jeannette Fleming, who accompanies Saga to a truck stop in search of a witness and ends up having completely gratuitous sex with an anonymous penis jutting through a glory hole in a washroom stall. For research purposes, apparently. (One laughs out loud to learn that she becomes pregnant as a result. Whaaaat?)

Not literary, not socially relevant, not well crafted or thought out. Just carelessly thrown together, recycled, boring nonsense the prime objective of which is to maintain Lars Kepler’s place as a #1 International Bestseller.

Not to mention the rabbits. If you happen to like rabbits, cute and vulnerable little creatures that they are, you won’t want to read this story. The Rabbit Torturer might have been a more appropriate title.

It’s all very formulaic and predictable at this point. Scandinavian noir has a reputation to live up to, and the Ahndorils are doing their best to make sure their novels keep up with the rest of the herd.

As a result, The Rabbit Hunter is profoundly disappointing, and it raises several pertinent questions. Has Scandinavian noir finally run its course? Has it now devolved into self-parody, dependent on having “Girl” in the title and gratuitous violence between the covers, broody, inscrutable characters who no longer appeal, and stories that go nowhere across a landscape that’s exhaustingly bleak?

At this point is it now more about marketing, industry leverage, and revenue generation than about fresh new writing, new voices, and new perspectives?

Perhaps it’s now time for us to start looking elsewhere other than Scandinavia for writers who capitalize on the vast potential of crime fiction, in whatever setting, as a genre of choice.