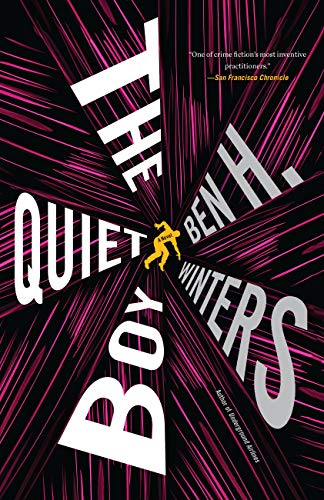 “Ben H. Winters’ rich writing style and haunting storytelling will suit those who love novels that are hard to define and leave readers without a clear decisive finish, stories that speak to our deepest fears about the meaning of life and the nature of existence itself.”

The Quiet Boy begins in 2019, with someone nicknamed The Rabbi working at a soup and salad restaurant in Los Angeles. We get a sense of his life, desolate, unfulfilled, and a chilling setup for a pivotal relationship that will unfold for the rest of the novel.

“A man’s voice on the other end: ‘Ruben? Honey?’ The Rabbi had to close his eyes. That voice, sweet and cunning. That old trickster’s wheedle. It was him, it was his father, the old god of his youth.”

Chapter two takes us back in time to 2008, setting up the back and forth through the decades that the novel covers to the end. In 2008, Jay Shenk is also still the hero of his son’s life.

Jay Shenk is a lawyer. A personal injury attorney who sees himself as a righter of wrongs, who just happens to get paid for his good deeds. He loves people, “his own heart a corona of empathy expanding outward throughout the damaged world.”

And that’s how he survives, until he meets the Keener boy.

Wesley Keener. A boy who experienced a terrible accident and potentially has a multi-million-dollar malpractice suit.

Shenk receives news about the potential case from an informant, so he races over to the hospital after hearing the latest tip. He lies his way past the elderly woman at the information desk, pretending to be there on behalf of a parent out of town and unable to reach his injured son.

“‘All I know for sure is, he was at school, one of the big high schools out here, and he had some kind of bad fall.’ Shenk was tossing out the few bread crumbs Malloy had provided, waiting to see some kind of recognition light up in Mrs. Desmond.”

And thus starts the rest of Jay Shenk’s life into a downward spiral from which he cannot recover. The question is who will he take down with him?

Wesley Keener, injured at his high school, survives brain surgery only to become a walking vegetable. He never eats, drinks, or sleeps. He never ages. He spends his time walking. Walking until he reaches a wall, then he walks in a new direction. Around and around and around, while his family, and new attorney, watch helplessly.

What exactly Wesley Keener suffers from is part of what makes Winter’s work cross genre. Rather than a straight up courtroom drama, the author infuses Wesley’s “illness” with a strange, paranormal spin.

The boy exists in an unchanging state. “Wesley walked the length of the dance hall, very slow. He reached the ornate and enormous doors at the far end, and then he turned and came back toward the bandstand. Arms at his sides, facing forward, eyes fixed.” And so he will remain.

Where Jay Shenk sees huge financial repercussions for the hospital, and likely a quick settlement, the universe sees an empty vessel.

Is Wesley the victim of poor medical care? Or is some higher being using him to create a rent in the world as we know it?

The other characters to orbit Wesley’s black hole of an existence are his parents Beth and Rich, his sister Evelyn, and a group of true believers, convinced Wesley has a link to another plane.

Each of these characters collide in the years following Wesley’s accident. While the quiet boy himself never changes—those around him suffer greatly.

Ruben—Rubie Bubie—The Rabbi, ages from the young boy who idolizes his father into a disaffected adult. Evelyn becomes Evie, an indie musician with angst in her performances. Beth and Rich merely get older. Their lives permanently stalled by a son who never dies, but also no longer lives.

While some of the questions brought up at the beginning of the book will be answered, several others are left open. The unconventional story structure is as intriguing as the concepts woven into the work.

Ben H. Winters’ rich writing style and haunting storytelling will suit those who love novels that are hard to define and leave readers without a clear decisive finish, stories that speak to our deepest fears about the meaning of life and the nature of existence itself.