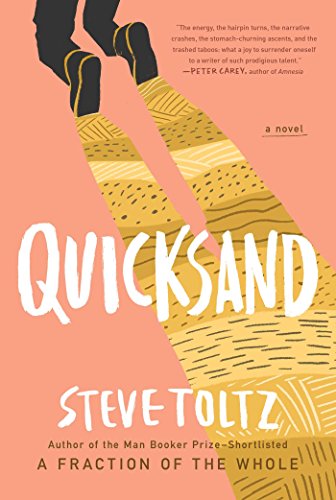 “the most self-absorbed and offensive character you’ll meet . . . so why is he so appealing?”

He’s the last person you’d want to sit by on a bus. As a brother-in-law, he’d probably make you poke forks in your eyes at the family picnic. Probably the most self-absorbed and offensive character you’ll meet . . . so why is he so appealing?

This is Aldo, and he’s the gyre this novel seems to revolve around, dizzy and disjointed in a way filled with seriously witty lines and repellent acts. Aldo and Liam are long-time friends who’ve grown into adults left with little to take pride in and a history of disappointment. Having both lost sisters to early deaths, they share a bond that makes you think that you’re headed for a poignant tale of friendship. Poignant, yes. Wildly unpredictable? That, too.

At times it appears that the purpose of Aldo is a mirror to discover the nature of Liam, a fascinating character on his own. Liam is a writer who is so interested in authenticity for his characters that he attends the police academy to research police procedure. When his novel dies soon after, he ends up becoming a policeman to make his living. The irony of painful reality versus dreams.

When the story begins Aldo is in a wheelchair, and the two are bored in a bar in Australia. Regret swarms them. Liam’s police uniform chafes him mentally, and Aldo is bent on offending everyone. Liam decides that Aldo is his lost muse and decides to return to writing: “to write about you is to troubleshoot the human spirit.”

For Aldo, a middle-class kid who is not graced with any advantages, life is a brutal game of catch as catch can. Early in his teens he’s falsely accused of rape, and it alters his personality forever. “Always democratic in his alliances, now he became friends with everybody . . . It was as if by surrounding himself with people, he was building airtight alibis for every minute he passed on earth.” His personality becomes a jarring combination of moral superiority and immoral and illegal business practices. Fond of himself, he assumes others loathe him.

Schemes abound, such as his idea to start a B&B&B (Brothel, Bed & Breakfast), as well as developing restaurants and films. Without much forethought, he reels in investors but delivers nothing. He becomes a legend in their region, a loser that seems to have a group of successful acquaintances who help bail him out—when they aren’t beating him up—enabling him to continue to delude himself. And there’s always Liam to come to the rescue.

But in his misery and joblessness, he has all the great lines. Of a stiff-mannered sketch artist, he said “he looked like he would have to be loved intravenously.” Of himself, he says he is “a sleeper angel waiting to be activated.” His acerbic presence in the first half of the novel is delightful.

Here’s where the narrative gets complicated. In a completely non-linear way, tossing most conventions aside, Toltz gets experimental. We are forced into leaving the storytelling for a long-winded section about Aldo’s fate. He’s facing trial, and we have yet to understand what caused his disability.

When he was a wise-ass blowhard with intriguing thoughts and observations, he was a sympathetic character. We liked him more than he liked himself (which was a lot!). His efforts to get the upper hand on his body are epic: He attempts surfing even if it means dragging his paralyzed body across the sand. But once the trial begins, and he’s given free rein to explain his life in his own voice (up to now we’ve had Liam narrating), he is simply a blowhard.

He tells astonishing stories, and it’s clear that madness is a factor weighing into the outcome. Scenes in court seem like hallucinations. His reality is one of a hypnotic attraction to desperate women, suicidal (yet considerate) people, and a host of other repellent and obnoxious images.

Awkward dialogue takes the place of much needed exposition, and it becomes a confusing tangle of allegations, the introspective ravings of a bore. This section, “The Madness of the Muse,” lives up to its title.

All said, the novel features tremendous wit and a juicy repartee with the two men. Liam is intriguing as a foil to Aldo: a straight man to his comedy.  By the conclusion, seeing that Aldo’s long-term influence on Liam actually makes Liam a better man is an irresistible concept.

In the final pages, Aldo asks Liam about that book he was writing. Liam’s response: “It’s been hard . . . Really hard. I mean, I’ve been working around the clock to get down an accurate cross-section of your traumas, but it’s difficult to make an underdeveloped person into a well-rounded character. I think I’ve accurately depicted how you’re critical of others yet despairing of your own unceasing self-regard, and how you don’t think so much as secrete thought. . . . The thing is, I want to make you real. Tangible.”