The Quest for the Time Bird 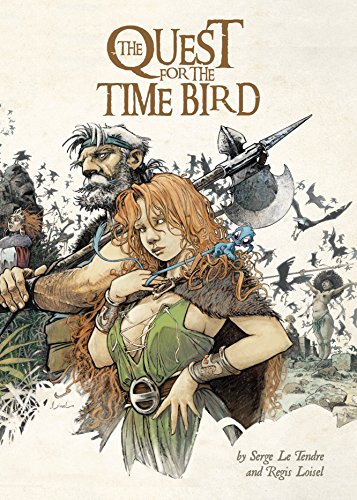 This remastered and colored edition brings together the four volumes (Ramor’s Conch, The Temple of Oblivion, Riga, and The Egg of Darkness) originally published in 1975 in black and white by Serge Le Tender and Regis Loisel. In the style of bandes dessinee of Franco-Belgian comics meant for a French speaking audience, this translated collection brings to English readers the world of Akbar.

Akbar is in danger from Ramor, the cursed god, who is intent on spreading unending chaos. In need of the legendary Time Bird to bind Ramor to his prison in a conch shell, the witch Mara sends her daughter Pelisse with the help of ageing warrior Bragon out to save the world. It is unique to have a female hero in a male-dominated world of comics, and one who is capable and strong, particularly in the 1970s.

Pelisse is Merida (from Brave) with her wild red hair, her ability to tackle challenges, and her refusal to submit to social niceties or protocols. She has a strange family—a mother for a witch and an unidentified father, who may be Bragon—and no siblings with which to compete. However, Pelisse still finds herself more often than not obstructed due to her gender by the preconceived notions of the men around her.

The series is reminiscent of another famous bandes dessinee, Tintin in the illustration of Volume 4: The Egg of Darkness, particularly in the drawing of the characters. The Quest for the Time Bird has a modern equivalent in Neil Gaiman’s Sandman series, at least when it is at its best in character detail, plot, and movement. Entire moods are set with the beautiful inking of illustrator Loisel in the blues of the ocean and icy white of mountains to the yellows and oranges of the beaches and deserts.

Bragon and Pelisse set off on a journey to find the conch shell in which Ramor is currently imprisoned before the spell binding him there wears off. Next, the duo must bring it to Mara, as well as find the Time Bird’s egg (it’s a phoenix-like creature), so she can reinforce the binding spell.

As in high fantasy, there is the traditional quest, accumulation of companions, some with strange powers, such as Furry, Pelisse’s pet; love interest (the unknown and masked knight who has entered the group out of his love for Pelisse); odd creatures (like the eraser-nippled sling-shot wielding Gallu); and enemies. The group is trailed by a mercenary bent on revenge against Bragon, and Fol, a river spirit who taunts their moves in tedious exchanges. And like many high fantasy tales, such as the Lord of the Rings, identity is an important piece to the story. The Quest for the Time Bird may take place over only nine days, but it is a lengthy read, and at times tiresome.

Interestingly, the detail given to the world of Akbar disappears in creating uninspired character design for the denizens of the kingdom. Pelisse, the hero, is drawn in the traditional style of comic artists—large breasted and with unsuitable clothes for questing: Pelisse’s breasts are always on display and constantly threaten to fall out of her tunic. The juvenile jokes about her breasts offer chauvinistic comic relief, no doubt for the male teenage fans of the series since it took decades until female readers and female fans were recognized.

Though it is nice for comic collectors to have an entire series in an omnibus, for new readers it will be overwhelming to try to read straight through.