The Queen: The Forgotten Life Behind an American Myth 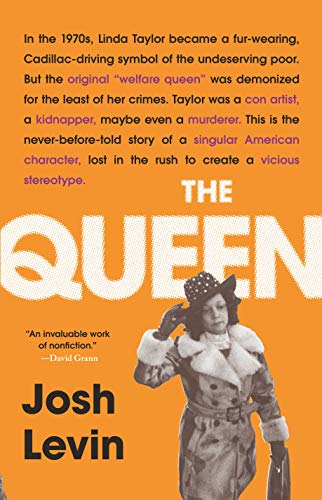 Even if this publication were fiction, it would be an eye-opener. The fact that it isn’t should really raise eyebrows for those who read it. As true as it possibly can be, all things considered, this is a tale that has more twists and turns than the Mississippi River. It is necessary to take the author’s word for it that all that is contained herein is fact, even for those alleged crimes committed for which the protagonist was not charged or convicted, which were quite a few.

This is the story of the woman in the 1970s who was among the most notorious of the early welfare cheats, the one who drove the multiple fancy cars, dressed elegantly and owned real estate yet used multiple aliases and identifications, had just as many addresses and children to support (not all hers and including those who sometimes didn’t even exist) and managed to scam the system primarily through that self-same system’s indifference and desire to avoid bad publicity.

If that wasn’t bad enough, hers was also a life of massive deceit, lying, and fraud and more than just petty crime. The list includes insurance fraud, burglary, theft, kidnapping, possible child trafficking and, not least of all, at least one murder allegation which, again, was not extensively investigated by the justice system, largely falling through the proverbial cracks.

Not only were her family origin, date, and place of birth, real name, and race mostly unknown but she essentially made a point of obscuring and obfuscating said information over the course of her life, which explains why so much of this story is as convoluted as it is. One could say she was chameleon-like, almost a shape-shifter.

At times, she passed as white, black, Latina, Hawaiian, and Fillipina. Just a wig or a hairstyle change and she could transform herself into any number of identities when applying for public aid. Her many marriages, partners, and companions, willing and otherwise, never stopped her from collecting welfare checks, Veterans Administration  benefits, even pension checks from the Railroad Retirement Bureau.

“Her” children, real, her own but others apparently kidnapped, and imagined, including at one point two sets of twins and a set of triplets of which two sets were born five months apart (unnoticed by the welfare caseworker), were many times neglected and even of different races, certainly something that no one who knew her could explain.

Once she was finally arrested for her activities, following a burglary report for purposes of insurance fraud, she became the point person for everything that was wrong about the public aid system in this country, to the point of being singled out, though unnamed, by Ronald Reagan over the course of two of his campaigns for the presidency and which specifically led to budget cuts and some changes in the welfare rules.

Although she spent a little time incarcerated, it did nothing to reform or rehabilitate her. She went right back to doing what she knew best: taking advantage of everyone, to the extent of using her own daughter’s name as one of her aliases. The apple didn’t fall far from the tree as even her daughter was convicted at one point of receiving undeserved public benefits.

She managed to finagle her way into the lives of at least two people and their families to the extent of being the beneficiary of life insurance policies and gaining money, valuables, and possession of homes and real estate through wills and trusteeships.

In any event, there is insufficient space in a review to detail all of the nefarious actions this woman undertook. Even as she aged, it got to the point where she could hardly tell what was true and what was a lie. In the end, she died a forgotten person but one who will always be associated with the “undeserving poor.”

As the author is a journalist, he has done extensive research in government archives and collections as well as interviewing those who had any knowledge or contact with his subject. As he is a journalist, the notes are not traditional and are tied to expressions and other references in the text.

The photographic section shows how the subject was able to cloak herself as different people and races over her lifetime career of crime.

The Queen: The Forgotten Life Behind an American Myth is a really interesting page turner. The hits keep on coming throughout. Read it.