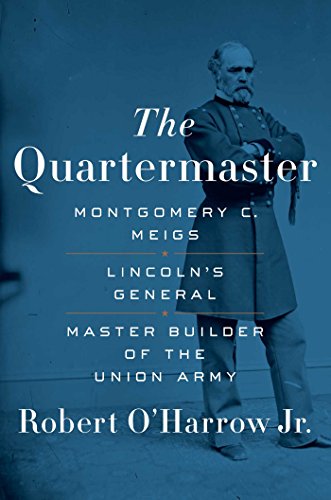 In the spring of 1861, scant months after the secession of the southern states and the commencement of the Civil War, the United States government was faced with a crisis of logistics. President Lincoln had called for volunteers to join the ranks of the Union army, and its numbers quickly swelled from fourteen thousand to well over three hundred thousand men.

The government was immediately swamped. Without a system to feed, clothe, arm, and move this new and unwieldy force, Lincoln knew he could not carry out an effective campaign against the Confederacy. Public pressure was mounting to engage the enemy, but first the problems of materiel, movement, and maintenance must be solved with “improvisations, bold schemes, and perhaps most important of all, imagination.”

The president's response to this crisis was to reach out to a U.S. Army captain of engineers known for his expertise in science, engineering and administration: Montgomery C. Meigs.

A restless, multitasking West Point graduate, Meigs had already demonstrated an unusual combination of intelligence, imagination, and managerial skills. He conceived and supervised the construction of the Washington aqueduct at a time when the capitol was in desperate need of a viable water system. He also assumed control of the project to expand the capitol, making a personal commitment to ensure that every space in the building would “inspire visitors and resonate with the promise of America.”

Then on the eve of war Meigs was tapped by Secretary of State William H. Seward and President Lincoln to spearhead a secret mission to fortify and retain Fort Pickens. It was a daring operation that earned him Lincoln’s praise and paved the way for his appointment to the position of quartermaster general of Lincoln’s army.

In The Quartermaster: Montgomery C. Meigs, Lincoln's General, Master Builder of the Union Army, Robert O'Harrow, Jr. provides an intriguing description of the Civil War from the perspective of General Meigs, whose fingerprints seem to have been all over every aspect of the government’s war effort.

O’Harrow details how Meigs procured boots, blankets, and tents, acquired horses and wagons to carry desperately-needed supplies to the men in the field, and organized riverboats, iron-clad vessels, and railroads to maintain supply chains to federal forces at each phase of the war, while continually fighting fraud, profiteering, and other forms of corruption on all sides.

Writing in a focused, factual style that reflects his journalistic experience, O’Harrow tells a story that is easy to follow. A welcome companion to other examinations of the political and administrative challenges of this turbulent period in American history, such as Doris Kearns Goodwin’s classic Team of Rivals, The Quartermaster retells each phase of the war in an engaging narrative that draws Meigs into the foreground where light can finally shine on his many accomplishments.

While O’Harrow presents a fine portrait of Meigs the professional soldier and administrator, he leaves the reader wishing for more about Meigs the man. The general’s wife, Louisa, disappears once Meigs has thrown himself fully into the war effort, and his children, other than son John who is killed by Rebel forces, receive only very brief mention. More attention to Meigs’s family life during the war years would have resulted in a more rounded and more satisfying biography. As well, O’Harrow devotes only the last page to Meigs’s final illness and death. After having spent such an enjoyable time with such a fascinating figure, one would have hoped for a somewhat longer sendoff.

Nonetheless, O’Harrow has delivered a carefully structured and very enjoyable story which leaves no doubt that General Montgomery C. Meigs was, as one historian wrote, “the unsung hero of northern victory.”