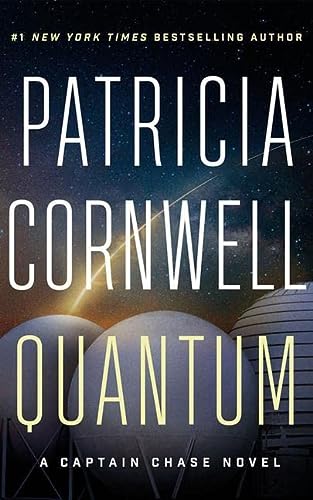 “As always, Cornwell establishes time, place and mood by expertly crafting each scene to make you feel as if you’re in it.”

Patricia Cornwell knows how to lure readers into a story, then keep them guessing until she’s good and ready to drop the clues they need to connect the dots. She’s proven it with her Kay Scarpetta series and nearly a dozen other books. A pro with a gift for keeping us on the edge of our seats, she also has an annoying habit of trying to ratchet up suspense by drawing out the inner thoughts of her protagonist for far too long.

In Quantum, the first book of her Captain Chase series, both her writer’s strengths and weaknesses are on display. She quickly establishes the talents and quirks of her main characters. Captain Calli Chase, the narrator, is a NASA pilot, quantum physicist, and cybercrime investigator—brilliant, meticulous, brave, self-doubting, and devoted to her mission and those she loves.

Carme (pronounced Karma) is Calli’s sometimes naughty and sometimes nice, equally brilliant twin sister gone MIA, who might be up to dangerous no good regarding the upcoming NASA mission that Calli is investigating. The twins are devoted but have polar opposite personalities. Calli sums it up by explaining how she came to be self-disciplined, “. . . growing up the way I did in the shadow of my ambitious overachieving twin who never suffers from self-sacrifice or doubt.”

NASA police major Fran Lacey, dear and trusted friend of Calli and respected long-time colleague, is a worrier who doesn’t let panic attacks get in the way of her dedication to solving crimes. General Dick Melville, commander of Space Force, is Calli’s former boss and mentor who’s in and out of her life and may or may not be a trusted ally, especially when it comes to hunting down Carme. Minor characters include Calli’s parents, both veteran NASA employees.

The book opens as a perfect storm of events are about to happen. A government shutdown is underway which will furlough NASA employees, though not Calli, while a blizzard is about to slam into the region. A resupply launch to the International Space Station is scheduled along with a LEAR (Low Earth Atmospheric Reader) installation that Calli and a few top brass know has a far darker mission than the public has been led to believe. They know that LEAR is “tricky business” and that “. . . it won’t be observing or measuring anything about Earth, the moon, Mars, deep space, not anything anywhere. Not exactly.”

Calli fervently hopes these space events will go off without a hitch in spite of a possible sabotage of equipment in the bowels of NASA’s research center, code named “Yellow Submarine,” an employee’s missing security badge and her suicide that looks more like murder. While Calli investigates these incidents, she puzzles over why her co-workers are not where they should be and about an unexpected visit from Melville, her former boss, who keeps asking probing questions without telling her why he wants her answers.

Meanwhile Carme has been incommunicado and is now under suspicion of being involved with the probable sabotage of the upcoming missions. All this as Calli waits on pins and needles to learn if she and Carme have been accepted into the astronaut program, a childhood dream of theirs.

As always, Cornwell establishes time, place, and mood by expertly crafting each scene to make you feel as if you’re in it. Using flashbacks and stream of consciousness, she writes plot details that raise questions about how Calli’s and Carme’s past may impact the present. For aeronautic and technology aficionados, Cornwell weaves fascinating facts about the history of flight and space exploration into the story and describes gadgetry worthy of a Bond film.

Readers of the Scarpetta books may feel a sense of familiarity with Quantum’s lead characters. Cybercrime investigator Calli’s ruminating and obsessing are straight out of the psyche of Medical Examiner Kay Scarpetta. In the Scarpetta series, NYPD detective Pete Marino is the worrier sidekick, the part played by NASA police major Fran Lacey in Quantum. Kay Scarpetta’s wild and beloved niece Lucy Farinelli becomes her errant twin Carme in the Chase series.

A page-turner, cliffhanger ending sets up readers for more books to follow. Less stream of consciousness would have made Quantum a tighter, more enjoyable and satisfying read.