Publish Your Nonfiction Book: Strategies for Learning the Industry, Selling Your Book, and Building a Successful Career 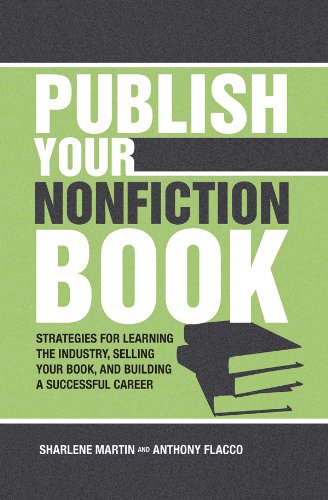 How badly do you want to be published?

This is the theme of Publish Your Nonfiction Book by Sharlene Martin and Anthony Flacco. It’s all about tenacity, fire, patience, and attention to detail.

It is a ruthless game, yet first-time authors still get published every day. According to Martin and Flacco, “there were 275,232 new titles and editions published by some 86,000 publishers in 2008, 75 percent of which were nonfiction titles. Another 285,394 print-on-demand titles were produced in 2008, making the total number of new or revised book titles in excess of 550,000.” If you think no one is reading books any longer, think again.

The passage to publishing is well known to those seeking discovery: writing the first draft, attending literary conferences, creating the dreaded proposal, attempting to build a “platform,” and sending the crackerjack query letter. Each step seems more formidable than the last. Scratch the surface of a “yet to be published” author and you will uncover an assorted bundle of resentment and jealousy for authors whose published books they deem less worthy and a modicum of encouragement from tales of those who were finally published after receiving hundreds of rejections.

There are many, many good “how to get published” books on the market including Judith Applebaum’s How to Get Happily Published; Jason Shinder’s Get Your First Book Published; Paul Brown’s Publishing Confidential; and of course Michael Larsen’s How To Write a Book Proposal.

However, Martin and Flacco give the best “news you can use” and are very clear about the specific purpose of the book, which is “to secure mainstream publication for writers of commercial nonfiction books.” They also cover the essential basics but offer an additional element about the realities of sending out a query letter or book proposal. The reader gets to be inside the head and behind the desk of a literary agent. It’s quite the ride.

While other guides to publication only offer advice on the basics, Martin and Flacco entertain its readers with genuine examples of truly wacky queries and real life examples of effective letters and proposals that sold both the agent and the publisher.

Where this book takes a major turn in differentiating from the others is in Chapter 1 under “Psychological Preparation.” Martin and Flacco extract and examine the crucial element of rejection.

In the highly competitive world of getting published, rejection is the chief annihilator of first-time authors. Learning to deal with the rejection that comes from agents as well as publishers means feeling less victimized. As well, by heeding the advice in this book, the would-be author may well survive emotionally as well as achieve success. The self-inflicted damage from real or imagined disrespect will affect not only how a writer perceives his or her work, but quite possibly also result in a damaging response to potential agents or publishers.

Another incandescent piece of advice is a dose of reality and the power of patience. Understanding what goes on in the agent’s world and putting that professional advice to work will take a prospective author a long way toward dealing with rejection as well as a much better relationship with a literary agency.

Most authors believe their books should appeal to the entire range of the reading public as well as to the film industry. Authors imagine themselves sitting on the television sets of “Oprah Winfrey,” “Good Morning America,” and “Jon Stewart.” But first things first, say Martin and Flacco. Their best advice for any writer looking to get published is to stay determined, be persistent, and don’t let rejection become a syndrome and strive for perfection. Focusing on a more specific target audience is also helpful.

The book also does a good job of delineating the legal literary issues of rights, the many different forms of nonfiction, preparing the book proposal, and creating the crucial platform or the credentials by which the author is known in the market for which the book is written.

They also address media training, which has become a new competitive standard for authors along with a well-written manuscript. Publishers are looking at authors with the ability to sell a book, not just by topic and talent but also by becoming excellent public speakers and good TV and radio talent, and actively engaging book store readers.

I highly recommend this book to any writer of nonfiction looking to get published for the first time as well as those authors preparing for a second or even third book. There is still much to learn here.