Prisoners of the Castle: An Epic Story of Survival and Escape from Colditz, the Nazis' Fortress Prison 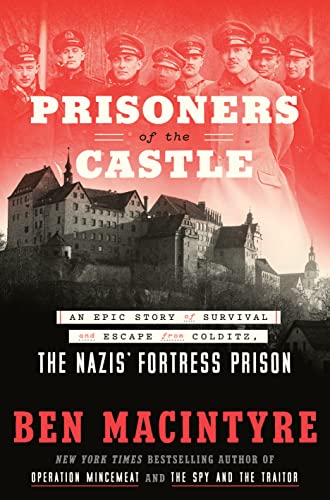 During WWII the Germans had about 1,000 prisoner of war camps, holding 170,000 British military alone. The number of stories that could be told is enormous. Two famous POW (prisoner-of-war) camps have entered public consciousness: Stalag Luft III, the one depicted in the 1963 film The Great Escape, and the other Colditz castle. An enduring fascination with POW escape stories assures a never-ending supply of these exciting tension-filled stories.

Colditz was the first WWII escape story to reach a wide public, and Ben Macintyre wants to challenge “the myth of Colditz,” which he says has stood unchanged and unchallenged for more than 70 years. What is that myth? That “prisoners of war, with mustaches firmly set on stiff upper lips, defying the Nazis by tunneling out of a grim gothic castle on a German hilltop, fighting the war by other means.” There are numerous accounts of Colditz, and Macintyre is right that the whole story has not been told. However much of it has, although not in one book. Commendably, Macintyre spends some time describing the changing status of POWs through the war and how this affected the men in Colditz.

Colditz castle is in Saxony, about 30 miles southeast of Leipzig. The Nazis turned it into a maximum-security POW camp for “bad boys,” those incorrigible Allied escape artists, officers who had previous escape attempts. Macintyre admits that Colditz generated many exciting stories of escapes and attempted escapes, but he wants to broaden the picture of these POWs whose lives were more complicated and interesting than previous depicted.

This means the story to be told is more than the captured Allied officers. It includes “communists, scientists, homosexuals, women, aesthetes, philistines, aristocrats, spies, workers, poets, and traitors.” About half the population of Colditz were Germans, guards and their officers, and their story needs to be told, too, writes Macintyre. Colditz was a frightening prison, but it was also absurd, idiosyncratic, and a place of high comedy.

The first book on Colditz, The Colditz Story, was published in 1952 by P. R. Reid, a former POW and escapee whose book inspired the 1955 British-made film of the same name starring John Mills and Eric Portman. Reid subsequently published an expanded version of his book in 1985. In 1972 the very popular 28-episode BBC series on Colditz starring David McCallum broaden public awareness. Colditz was a potent symbol of ingenuity and perseverance against overwhelming odds that form part of the popular mythology surrounding the British war effort in World War II. “Outwitting the Hun” was a universal sport.

Shortly following Reid’s book another prisoner and escapee, Airey Neave, who later became a Nuremberg War Crimes trials investigator, a Conservative MP, and an advisor to Margaret Thatcher before being assassinated by the IRA, wrote his account, They Have Their Exits and described the “arse-creeper,” an indispensable escape kit that fit into the rectum. He and a Dutch officer escaped to Switzerland, after which he worked for the newest branch of British intelligence, MI9, whose mission was to help POWs escape.

In 2003, Henry Chancellor published his Colditz: The Definitive History: The Untold Story of World War II’s Great Escapes and in 2006 film offered the two-part Colditz story starring Damian Lewis. Also, in 2006 Oxford University Press published S. P. MacKenzie’s The Colditz Myth: British and Commonwealth Prisoners of War in Nazi Germany. MacKenzie wrote that Colditz enjoys unparalleled name recognition both in Britain and in other parts of the English-speaking world. This represents just a handful of “Colditz stories.” Macintyre’s claim that he is bringing us the “inside story of Colditz” rings a bit hollow as there are many “inside stories” and many of them have been told.

Colditz castle was not an ideal prison for the Germans and its motley crew of prisoners included Poles, British, Belgians, Dutch, French, Czechs, Canadians, Commonwealth officers, and later some Americans. Macintyre points out that the notion that it was the duty of the British officer to attempt to escape a POW camp is false, popularized in several POW films. Furthermore, not all prisoners wanted to escape—the danger and difficulty was enormous. However, many prisoners were there because they had tried to escape from other POW camps and therefore, they were a determined escape bunch. The first man to successfully escape Colditz, a “home run” as the POWs called it, was the dashing and enigmatic Alain Le Ray, a Lieutenant in the elite French mountain infantry force who had been wounded and captured during the battle of France and who only spent forty-six days in Colditz.

There are fascinating subtexts, for example, the tension between Gaullist French officers who were Free French, French who supported the collaborationist Vichy regime and were anti-Semitic, and the Jewish French officers. Dutch officers proved adept at picking locks.

Gaining intelligence was of overriding importance for POWs. Officers who had escaped and been captured and returned to Colditz brought with them a wealth of information about “the outside world.” The escape story of the Dutch officer Lieutenant Hans Larive is illustrative. He was recaptured on a train close to the Swiss border. The SS officer who interrogated him had once worked in Amsterdam and liked the Dutch asked Larive why he had tried to cross the frontier by train rather than on foot to which Larive replied “I didn't know how to get through the defense line.” Larive was skilled in extracting useful information from the unwary SS officer who then showed him on a map a finger of Switzerland that jutted 300 yards into German territory and was unguarded. This information was priceless for the escape committee in Colditz.

Many surprising characters show up in Macintyre’s stories such as Christopher Clayton Hutton who with staggering energy and ingenuity created escape kits for downed airmen and the trickier task of smuggling escape tools into POW camps. Desmond Llewelyn, the actor who played Q in seventeen James Bond films, was himself a POW in Germany and doubtless was familiar with Hutton’s extraordinary escape gizmos, basing his Q character as a fictionalized version of Hutton. Later we learn that the daughter of eccentric prisoner Mickey Burn’s former Dutch lover is none other than the actress Audrey Hepburn.

Macintyre tells many stories, perhaps too many; some seem to just fill pages and others are abbreviated, leaving out the tension inherent in a death-defying escape attempt, and still others are exciting such as the liberation of the camp at war’s end. One remarkable story is the glider built by the prisoners that although it never flew, remained hidden from the Germans. In wanting to tell the whole story a story line is lost, characters pop up and then disappear, but Macintyre wrote an interesting, at times riveting, and rewarding book. One minor complaint: the “U.S. Air Force” did not exist during WW 2; it was the Army Air Force, still a part of the army.